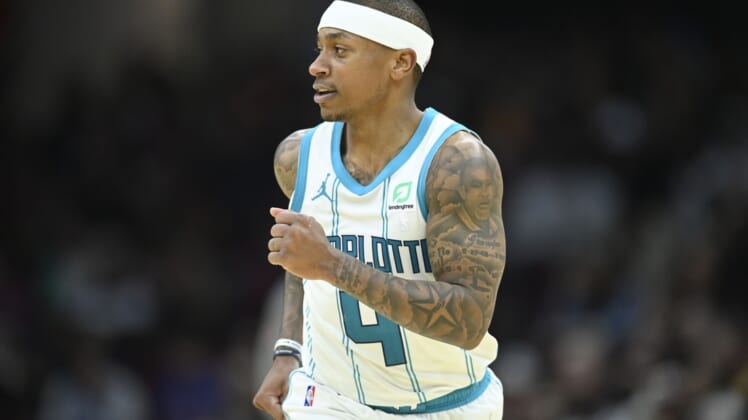 If the Charlotte Hornets are to make the playoffs for the first time since 2016, LaMelo Ball will be front and center.

Friday in a 142-120 win at New Orleans, Borrego paired Ball with Thomas for the first time, and Ball was at his best, with 17 points and nine assists as the Hornets shot 59.8 percent from the floor, their highest field-goal percentage in a game since 2008.

“That was one of the most complete games, Melo, that I’ve seen him play,” Thomas said. “As in, he controlled the offense each and every possession. He controlled everything the whole game, and I think that’s what gave guys confidence to come out and play like that.

“He’s the head of the snake, so when he plays like that, the team is tough to beat for sure.”

Since signing Thomas to his first of two 10-day contracts March 2, Charlotte has won three of its five games.

Borrego said pairing Ball, his young star, with the veteran Thomas could be a factor for the Hornets over their final 14 games of the season.

“It makes them think, and it adds to their scouting focus,” Borrego said. “I’d like to get Melo off the ball more. They are so loaded up on him, so physical with him on pick-and-rolls that if I can move him off the ball, it’s just going to add another dimension to our offense.

While the Hornets are looking to continue their push for the playoffs with Thomas aboard — the team currently holds the final play-in spot in the Eastern Conference — the Thunder continue to roll through a series of players who have spent time in the G League.

The latest is Lindy Waters III.

“It’s super fun to watch him go out there and play, especially in front of his home crowd,” teammate Darius Bazley said. “When he checks in, the cheers are a little bit louder.”

After seeing some success behind the 3-point line, Waters has had to adjust to defenses closing out harder on him.

In Sunday’s 125-118 loss to Memphis, Waters adjusted, showing off pump fakes to keep teams from being consistently aggressive against him on the perimeter.

“When I was in the G League, it was like that, too,” Waters said. “I started out just catching and shooting the ball, started making shots on good volume. Once I started showing up on scouting reports, guys started trying to run me off the line.

“I worked on my fly-bys, my pump fakes, things like that. Now, it’s just translating over.”

The Hornets won the only other meeting this season between the teams, 121-98, in Charlotte on Jan. 21.

Monday’s game will be the last in a stretch of playing five of six games at home for the Thunder. They then will head out on a three-game trip.