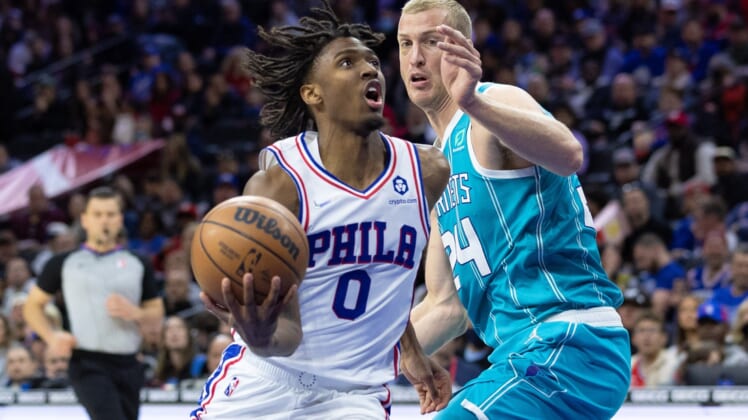 This is hardly the time of the season that the Charlotte Hornets need to be figuring out their issues at the defensive end of the court.

But that is the case for one of the league’s more unpredictable roller-coaster rides.

Now comes a game Thursday night against the visiting Orlando Magic that seems critical in terms of regenerating some confidence for the Hornets.

The Hornets (40-39) haven’t dialed up enough resistance at key times.

Charlotte’s 144-115 loss at Miami on Tuesday night brought up recurring issues. It looked similar in some ways to the 144-114 setback at Philadelphia on Saturday.

With three games across a four-day span to close the regular season, the Hornets have work to do. They’ve lost three of their last four games as they jockey for position within the play-in portion of the Eastern Conference postseason race.

“I don’t think fatigue is a factor here,” Borrego said.

Mo Bamba scored 21 points in that game for the Magic, a notable number because Orlando hasn’t produced high-level offense recently. That marked just the second game in the team’s last eight outings that a Magic player reached the 20-point mark.

There have been lineup tweaks for the Magic, with Markelle Fultz taking a starting role for the first time this season Tuesday and turning in 16 points. Guard Jalen Suggs was in action after a 10-game absence with an ankle injury.

However, teammate Franz Wagner lasted just seven minutes before he was sidelined with another ankle injury after sitting out the previous game. Still, it’s a good chance for the Magic to evaluate personnel.

The Hornets can ill afford to look past Orlando.

The Magic visited Charlotte on Jan. 14 and pinned a 116-109 loss on the Hornets. That halted a four-game winning Charlotte streak and was the team’s only defeat during an eight-game stretch.

The Hornets watched as the Heat racked up 41 points in the second quarter on Tuesday. It was another example of defensive breakdowns that too often have defined some of Charlotte’s low points of the season.

“We have to be better defensively and correct that in a couple days,” Borrego said. “The last two games teams have made over 20 3s against us, so that’s going to be the difference. So what can we do from the 3-point line? Run them off more, switch more, be up more. There’s obviously going to be areas when you give up 144 that you have to correct.”

The Hornets went with a smaller rotation at times in the Miami game.

“Whether we stay with this rotation, I’ll figure out going forward,” Borrego said. “We can trim a little bit or we can add. We’ve got some depth here. We’ll adjust.”

Charlotte won the first two matchups this season against the Magic. This game will be Orlando’s road finale.