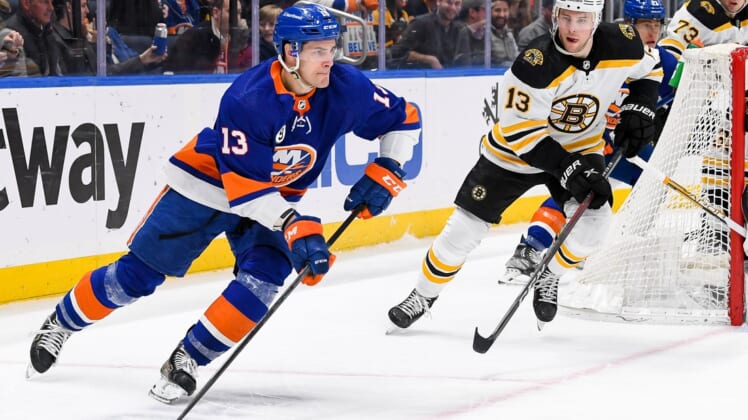 Misfortune has made it all but impossible for the New York Islanders and Montreal Canadiens to build off the deep runs they mounted in the Stanley Cup playoffs last spring and summer.

But both teams will be looking to replicate a rare 2021-esque performance Sunday afternoon, when the Islanders are slated to host the Canadiens in Elmont, N.Y.

Each team has been off since recording a stirring home win Thursday night, when the Islanders beat the Boston Bruins 4-1 and the Canadiens snapped a 10-game losing streak by edging the St. Louis Blues, 3-2, in overtime.

The victory was as nostalgic as it was cathartic for the Islanders, who eliminated the Bruins in a heated six-game second-round series last June before falling in seven games in the semifinals to the Tampa Bay Lightning, who went on to beat the Canadiens in the Stanley Cup Final.

The Islanders were a popular choice to reach the Final this year, but a COVID-19 outbreak at the end of a franchise-record 13-game season-opening road trip led to an 11-game winless streak (0-8-3). New York entered Saturday 16 points behind Boston in the race for the final Eastern Conference wild-card spot and is 4-16-2 against teams currently in playoff position.

But they improved to 2-0-0 against the Bruins on Thursday, when the Islanders — who never led in losing the final three games of a four-game road trip that ended with a 6-3 loss to the Buffalo Sabres on Tuesday night — were outshot 13-6 in falling behind 1-0 after one period before scoring four goals and outshooting Boston 23-14 in the final 40 minutes.

“We knew tonight was huge after dropping one in Buffalo,” said Islanders center Mathew Barzal, who scored New York’s third goal. “And where we’re at in the standings — we know who we’re chasing. That was a big one for us and I felt like we, for the most part, played championship-caliber hockey and just played smart.”

Injuries all but ended the Canadiens’ hopes of following up their Cinderella run to the Finals — Montreal had the fewest points of any playoff team last year — before the season even began. Goalie Carey Price (knee) and defensemen Joel Edmundson (back) and Shea Weber (numerous ailments) haven’t taken the ice since a 1-0 season-ending loss to the Lightning in Game 5 of the Finals on July 7.

The Canadiens have recorded an NHL-low 25 points while enduring four losing streaks of at least five games apiece. Head coach Dominique Ducharme was fired Feb. 9 and replaced on an interim basis by Hall of Famer Martin St. Louis.

But the Canadiens have a chance to construct their first winning streak of the season after a stirring win over the Blues, who are a top-3 team in the Central Division. Pavel Buchnevich gave St. Louis a 2-1 lead by scoring with 1:19 left in the third, but Cole Caufield scored the tying goal with 10 seconds remaining before collecting the game-winner 2:22 into overtime.

“I’m really happy for the guys, they deserved to win,” said Canadiens coach St. Louis. “Losses are heavy. And it’s not just the win, it’s the way we did it because we played a really good game and we got scored on with (1:19) left and our backs were to the wall.”