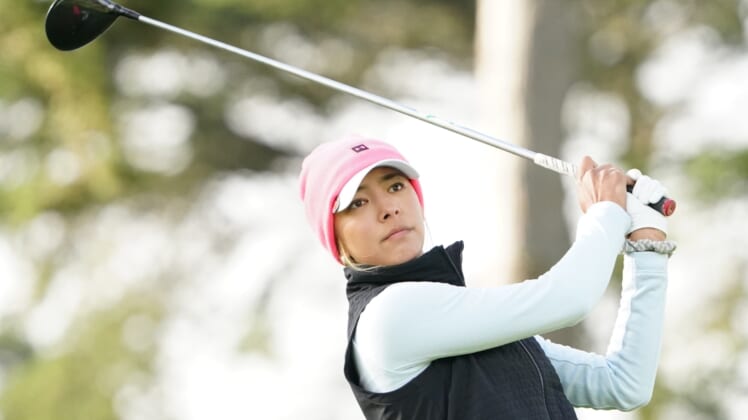 Alison Lee made herself at home in her hometown event on Thursday, charging to the first-round lead in the LA Open.

Jennifer Song, Haylee Harford, Janie Jackson, the Netherlands’ Dewi Weber and the South Korean duo of So Yeon Ryu and Sei Young Kim are tied for fifth at 3 under.

Lee, who has never won an LPGA event, made two birdies on the front nine and three on the back nine in a bogey-free round.

“I feel really comfortable, and I would say it’s not so much the course but just being in L.A., seeing a bunch of familiar faces out there,” she said. “Sometimes when you play week to week it does get pretty lonely out there.

“When you come to an event and you see people that you recognize and you know and they’re there to support you and bring up and lift you up, … it’s just it’s nice. Good to see my parents, too, because they were able to come out this week. Overall just feels great. Hopefully I can just keep the ball rolling.”

Talley had five birdies in an eight-hole stretch at the middle of her round before making her lone bogey at the par-4 eighth hole.

“I’ve been playing really well,” Talley said. “I worked really hard in the offseason with all my coaches, my trainers, mental coach. … There is a big team around me. We’ve been working very hard and I feel confident.

“Obviously … there is a lot of golf to be played, but at least I know I feel good about my game.”

“Wilshire is not an easy course, (so) 4 under is a pretty good start for me,” Hataoka said.

Pedersen surrounded her only bogey with two hot streaks — three birdies in a four-hole stretch on the front nine, back-to-back birdies on the back nine.

Defending champion Brooke M. Henderson of Canada shot a 5-over 76 to leave her tied for 116th and in danger of missing the cut. Henderson withdrew from last week’s Lotte Championship in Ewa Beach, Hawaii, after the first round due to an illness.