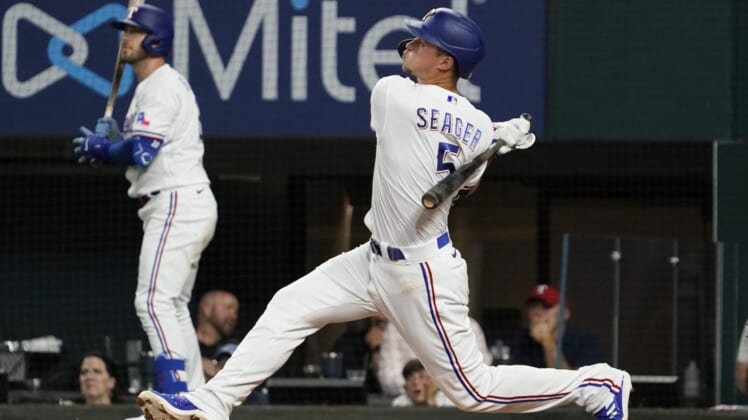 Neither a line drive off his leg nor the Tampa Bay Rays’ lineup could slow down Major League Baseball’s ERA leader. Left-hander Martin Perez threw seven shutout innings and retired the final 16 batters he faced in the Texas Rangers’ 3-0 victory in Arlington, Texas.

Corey Seager and Adolis Garcia each connected on home runs in a three-run fourth inning off Ryan Yarbrough, and the Rangers have taken the first two of their four-game series.

Joe Barlow closed out the ninth for his ninth save in as many chances, completing the three-hit shutout. Texas has won six of its last seven.

Perez, who lowered his MLB-leading ERA to 1.42 ERA, yielded just three hits, and struck out five, while not issuing a walk.

Still, it wasn’t completely smooth sailing for the southpaw. In the second inning, Perez was shaken up when he took a line drive near his right knee. On the play, Taylor Walls reached on an infield single that deflected off Perez’s leg. The medical staff checked on Perez, who pitched on.

After Walls’ single, Perez set down the next 16 batters he faced. For the month of May, Perez’s ERA was 0.64.

Yarbrough didn’t allow a hit through the first three innings, but the left-hander was victimized by the long ball in the fourth inning. Seager and Garcia each connected on home runs in a three-run frame.

Seager crushed a first-pitch curveball for his 11th home run to open the fourth. Mitch Garver doubled and with one out, Garcia blasted a two-run shot to left-center. It was his eighth of the season.

Neither offense managed much else.

Yandy Diaz had a two-out single in the first inning off Perez.

In the second inning, the Rays had a one-out single from Francisco Mejia. With two outs, Walls laced his low liner that struck Perez’s right knee area. Statcast had the exit velocity at 97.3 mph.