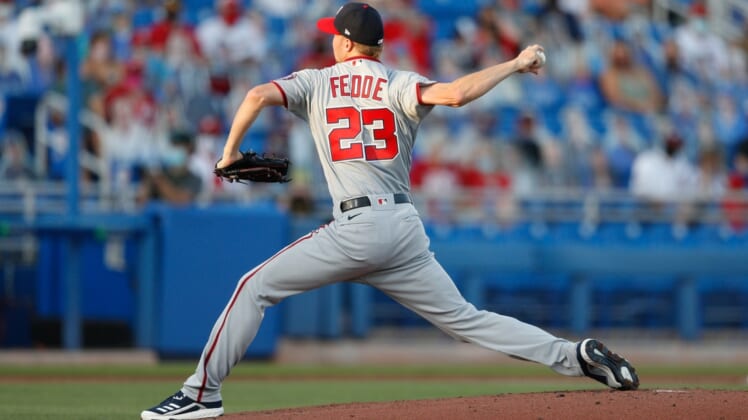 Trea Turner added four hits for the Nationals, who gained a split in the two-game set.

Washington starter Erick Fedde (2-2) allowed one run, two hits and three walks (one intentional) over six innings. The right-hander struck out seven in his longest outing of the season.

George Springer left the injured list to go 0-for-4 as the designated hitter and leadoff hitter in his Blue Jays debut. He had been sidelined due to an oblique strain and a quad strain.

The Nationals loaded the bases with no outs in their three-run third inning after Victor Robles and Turner singled and Harrison was hit by a pitch. Ryan Zimmerman hit a two-run single, and Starlin Castro followed with an RBI single.

The Blue Jays left the bases loaded in the bottom of the third, which ended when Turner made a superb play on Randal Grichuk’s trickler to shortstop.

Harrison’s second homer of the season, a drive to center, gave the Nationals a 6-0 lead in the fourth. It followed a one-out walk to Robles and a single by Turner.

Bell’s second homer of the season came against Ty Tice and followed a walk to Kyle Schwarber in the fifth.

Gurriel hit his first homer of the season to lead off the bottom of the fifth.

Bichette led off the bottom of the eighth with his sixth homer of the season against Daniel Hudson.