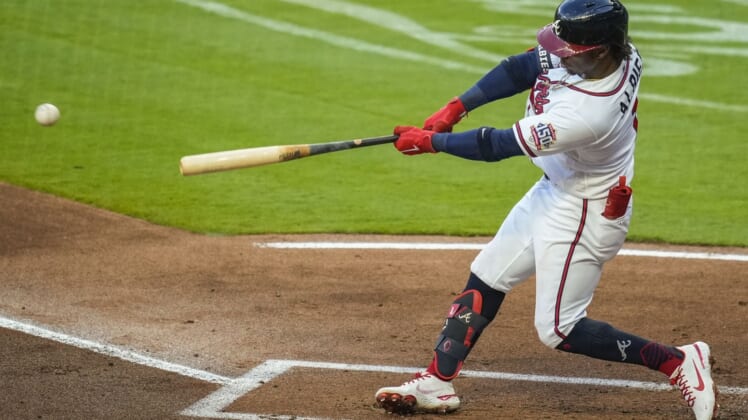 Freddie Freeman and Austin Riley both went 4-for-5 with a home run and right-hander Huascar Ynoa pitched 5 1/3 shutout innings while delivering one of five Atlanta Braves homers Wednesday in a 10-0 rout of the visiting Chicago Cubs.

The Braves won their third straight against the Cubs to begin the series, out-hitting them 18-5. Atlanta will go for a four-game sweep Thursday.

Chicago, which was blanked 5-0 on Tuesday, has lost five straight. The Cubs haven’t scored in 20 consecutive innings.

Atlanta reached Cubs starter Kyle Hendricks for 11 runs on seven hits in 3 2/3 innings to defeat the right-hander for the second time in 10 days.

After connecting for four first-inning home runs against Hendricks at Wrigley Field on April 18, the Braves raced to a 4-0 lead in the first again Wednesday behind separate two-run shots from Marcell Ozuna and Riley.

It was plenty of support for Ynoa (2-1), who scattered four hits and two walks while getting nine of the 11 strikeouts recorded by Braves pitching.

Freeman delivered a two-run double in the second inning to expand the lead to 6-0 before Hendricks (1-3) recovered to retire five of the next six batters he faced.

Ynoa contributed a third Braves home run against Hendricks leading off the fourth, drilling a solo shot to left for his first career homer.

Hendricks, struck out three and did not walk a batter, already has yielded 10 home runs in 22 2/3 innings this season — the same amount of homers he allowed in 12 starts covering 81 1/3 innings in 2020.

Freeman and Ozzie Albies hit solo homers against Alec Mills in the sixth. Freeman had three RBIs, and he and Riley each finished a triple short of the cycle.

Ozzie Albies and Guillermo Heredia each had three hits for the Braves, while Ynoa had two.

Typically a threat in the middle of the order, Cubs first baseman Anthony Rizzo batted leadoff and collected one of Chicago’s hits.

He later logged his second career pitching appearance, retiring two of three batters he faced in the seventh, punctuating the stint with a strikeout of Freeman on a 61 mph curveball.