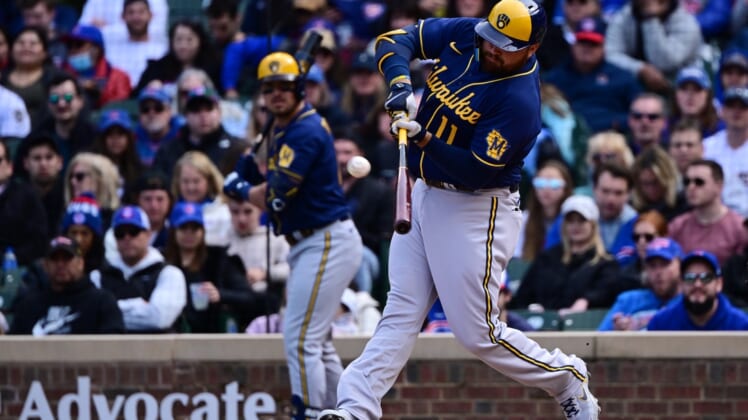 Mike Brosseau hit a pinch-hit, go-ahead solo home run in the seventh inning and Willy Adames and Rowdy Tellez also homered as the visiting Milwaukee Brewers defeated the Chicago Cubs 5-4 on Sunday afternoon to avoid a three-game sweep in the season-opening series.

Christian Yelich added two hits — including an RBI double — for the Brewers, who out-hit the Cubs 5-4. Five Milwaukee relievers limited Chicago to one hit over the final five innings.

Brad Boxberger (1-0) scattered a hit and a strikeout in the seventh to earn the win. Josh Hader struck out two in a perfect ninth to notch the save.

The Cubs showed resilience in taking a first-inning lead. After Rafael Ortega, who reached on a walk leading off the game, was caught stealing for the second out, a walk and single put two runners aboard for Seiya Suzuki.

A Japanese outfielder who signed a five-year, $85-million contract in the offseason, Suzuki launched his first major league home run, sending a Freddy Peralta pitch 412 feet into the left-field bleachers for a 3-0 Chicago lead.

With Peralta settling in, the Brewers got on the board in the third when Adames connected against Cubs right-hander Marcus Stroman, who took a no-decision in his team debut. A free agent who signed for three years and $71 million in the offseason, Stroman spaced one run and two hits in five innings with three walks and three strikeouts.

Milwaukee grabbed a 4-3 lead with a three-run, sixth-inning rally, but promptly surrendered the advantage in the bottom of the inning when Chicago’s Clint Frazier scored on a wild pitch. That set the stage for Brosseau, a native of nearby Munster, Ind., who homered on a 2-0 pitch from Daniel Norris with one out in the seventh.

Norris (0-1) took the loss, scattering one run and one hit in 1 1/3 innings while striking out two.

Cubs outfielder Ian Happ was held out of the lineup as a precaution, manager David Ross said. Happ was hit by a pitch on the left kneecap during Saturday’s win.