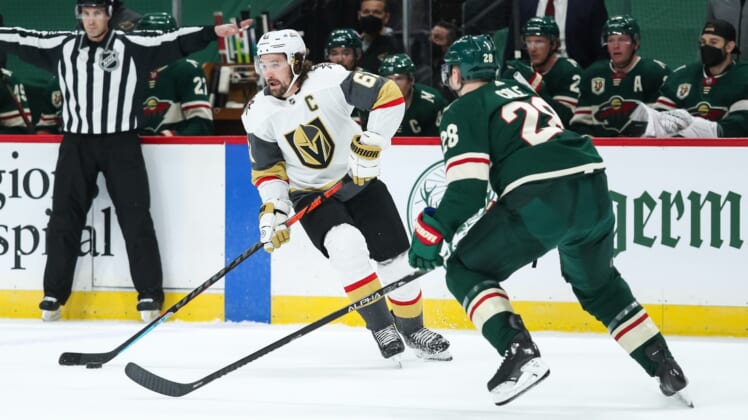 The Vegas Golden Knights head into Thursday night’s first game of two consecutive with the Minnesota Wild in Las Vegas looking up in the West Division standings for the first time since Feb. 21.

However, a win over the Wild would allow the Golden Knights, who trail Colorado by one point, to leapfrog the idle Avalanche and regain first place.

Vegas had a six-game home winning streak snapped when they fell 4-2 to the Los Angeles Kings on Wednesday night. Colorado crushed the Arizona Coyotes 9-3 to take over the top spot.

It was just the third home loss in 18 games at T-Mobile Arena (14-3-1) for the Golden Knights, who fell behind in the first two minutes on a goal by Andreas Athanasiou, trailed 4-1 after two periods, and lost for the second time in 10 days to Calvin Petersen, who finished with 40 saves.

“It was one of those nights,” Vegas coach Peter DeBoer said. “You have to give them credit. They played with a real desperation to start the game that we didn’t match, which was disappointing because you knew that they were going to come with it.

“They’re fighting for a playoff spot and they don’t want to get swept in this two-game series. So we knew that was coming, and still I thought we had a real poor start.”

The Golden Knights cut their deficit to 4-2 on a Shea Theodore goal early in the third period but were unable to get any closer.

It didn’t help that Vegas was down to just 10 forwards after Ryan Reaves was a late scratch due to a lower-body injury and first-line center Chandler Stephenson was given a game misconduct along with a five-minute major in the second period for an ugly elbow to the head of Tobias Bjornfot.

“The decision (on Reaves) was made after warmup,” DeBoer said. “Do I think that it had an effect? For sure when you compound the one man short with (Stephenson) to go two men short. But I think we still put some pressure on in the third. I’m not going to use that as an excuse for why we lost. We weren’t good enough to win tonight.”

Vegas captain Mark Stone added, “You don’t want to go down two forwards. It would be nice to play 12 (forwards) and six (defensemen), but that’s the nature of the business. I don’t think that really impacted the game a ton.”

Minnesota comes into the Thursday contest off a 4-2 loss at San Jose and is 0-4-1 in its past five road games.

The Wild got swept in an earlier pair of games with the Golden Knights in Las Vegas, 5-4 in overtime and 5-1, on March 1 and March 3, respectively, but bounced back a week later to return the favor in Saint Paul with 2-0 and 4-3 victories.

Minnesota, which started its four-game road trip with a 4-3 shootout loss to the Sharks on Monday. In the Wednesday rematch, San Jose jumped out to a 2-0 lead in the first 10 minutes, and the Wild never caught up.

The Wild enter the Thursday contest in third place in the West, six points behind the Avalanche.

“There’s a lot of season left,” Minnesota captain Jared Spurgeon said. “You just can’t look at these two games and start pouting. … We’ve got two games left on this road trip starting (Thursday), and we can turn this thing around real quick.”