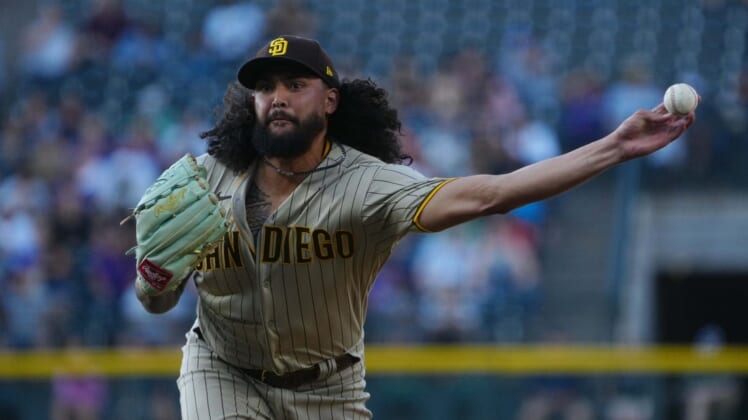 C.J. Abrams slugged a three-run homer, Jake Cronenworth and Manny Machado socked solo shots and the San Diego Padres halted a 10-game losing streak in Denver by holding on for a 6-5 victory over the Colorado Rockies on Monday night.

Cronenworth had three hits and scored twice while Abrams, Machado and Nomar Mazara each had two hits for the Padres, who won for just the sixth time in their past 17 games.

Sean Manaea (4-4) gave up two runs in 6 1/3 innings while winning for just the second time in his past 13 starts. He gave up five hits and one walk while striking out five.

Randal Grichuk homered for Colorado, who lost at home to the Padres for the first time since May 12, 2021. Jose Iglesias stroked an RBI double to right in the eighth for his 1,00th career hit.

Iglesias’ milestone hit cut Colorado’s deficit to 6-3, and Colorado moved within one in the ninth as Connor Joe and Charlie Blackmon each hit two-out run-scoring doubles.

San Diego’s Taylor Rogers then retired C.J. Cron on a grounder to second for his 24th save.

The Rockies played without Kris Bryant, who was placed on the paternity list earlier Monday.

San Diego built a 6-2 advantage in the eighth as Jorge Alfaro reached on an infield single with one out and Trent Grisham walked. Abrams then launched his second career homer by jumping all over a 2-2 curveball from Jake Bird and sending it 427 feet over the fence in right.

Colorado’s Jose Urena (0-1) gave up two runs and seven hits over six innings. He struck out three and walked three.

The Padres struck in the first inning when Cronenworth hit a leadoff single, moved to third on Mazara’s one-out double and scored on Luke Voit’s sacrifice fly.

Cronenworth led off the third inning by smashing an 0-1 slider from Urena 410 feet over the fence in right. It was Cronenworth’s eighth homer of the season.

Colorado cut its deficit to 2-1 in the fourth. Grisham took a poor angle on Blackmon’s leadoff liner to center and the ball got past him for a triple, and Cron followed with a sacrifice fly to score Blackmon.

Machado made it 3-1 in the seventh with a mammoth 446-foot blast to left. The homer off Lucas Gilbreath’s 2-2 slider was Machado’s 15th of the season.

Grichuk hit his ninth homer with one out in the bottom of the seventh to end Manaea’s night.