Home of the Brave: What’s next for Freddie Freeman? 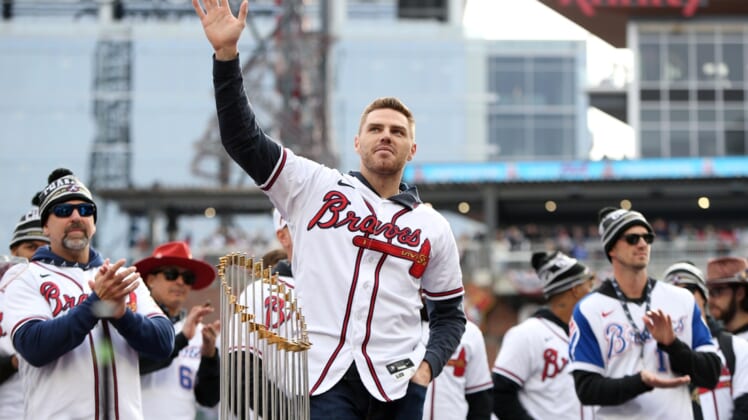 First baseman Freddie Freeman remained unsigned Monday but the Atlanta Braves appear to be moving forward as defending World Series champions without him.

Braves general manager Alex Anthopoulos said the deal he executed to acquire Oakland A’s All-Star Matt Olson for multiple prospects was more emotional than any transaction in his career.

The Los Angeles Dodgers, New York Yankees, Toronto Blue Jays, Boston Red Sox, Tampa Bay Rays, Chicago Cubs and others have been connected to Freeman in the free agency rumor mill. Projections are that Freeman could fetch $250-plus million on the open market.

Trading outfielder Cristian Pache, catcher Shea Langeliers, and right-handed pitchers Ryan Cusick and Joey Estes to the Athletics was costly, but the move underscores the unspoken expectation Atlanta’s front office had that Freeman was set to flee in free agency.

“Every day it felt like it was getting harder to wait,” Anthopoulos said. “This was the first thing that made sense for us, as hard as it was to do.”

Olson, who is from the Atlanta area, played five-plus seasons with the A’s. A two-time Gold Glove winner, Olson was a first-time All-Star in 2021 and finished eighth in American League MVP balloting.

Freeman, 32, has spent his entire 12-year MLB career with the Braves, who did not lock him up to a new deal before the owners locked out the players in December.

The Braves signed Freeman to an eight-year deal in 2014 that paid him $135 million. Entering free agency, the highest-paid first baseman in terms of average annual value is Paul Goldschmidt of the Cardinals at $26 million per season. Joey Votto’s contract with the Reds is worth $22.5 million per season.