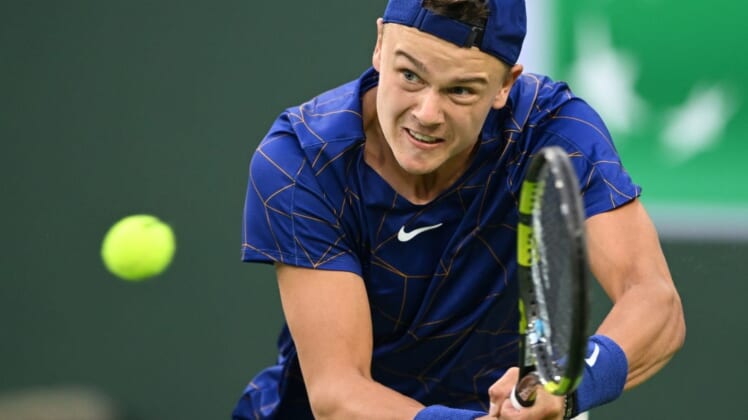 As a result, Rune became the first Dane to reach the quarterfinals of a Grand Slam tournament in the Open Era.

“I have an unbelievable feeling right now,” Rune said in his on-court interview after the three-hour match. “I was so nervous at the end but the crowd was amazing for me the whole match, the whole tournament. I am so grateful and so happy to be playing on this court. You guys are amazing.

“I was very nervous but I know at the same time that if I go away from my tactics against a player like Tsitsipas I am going to lose for sure. I told myself just to keep at it and play my plan in the tough moments. It worked out so well in the end and gave me a huge confidence boost. It is just so great to still be here.”

This is his first-ever appearance on the clay courts at Roland Garros in Paris. He moved to 21-7 on clay this season.

The match turned in the fifth game of the fourth set, when Tsitsipas couldn’t hold serve. Rune broke the Greek again two games later to take a commanding 5-2 lead but couldn’t serve out for the set.

Tsitsipas crawled back to 5-4 and had three break points on Rune’s serve, but Rune staved them off for the win.

Seven of his eight career titles have come on clay, and this will be Ruud’s first appearance in a Grand Slam quarterfinal.

“It feels great,” said Ruud in his on-court interview. “It’s been one of the goals for me this year, to try and reach the quarter-finals of a Grand Slam. I don’t know why, but suddenly when I came here this year I felt a little bit more experienced playing five sets.”

Ruud had 42 winners against 19 unforced errors.

Seventh-seeded Andrey Rublev of Russia advanced to his second Roland Garros quarterfinal after his fourth-round opponent, Jannik Sinner, retired in the third set of their match due to an apparent left knee injury, Rublev won 1-6, 6-4, 2-0.

Sinner, the 12th seed from Italy, breezed through the first set but started to labor in the second set. He played with a taped left knee.

Rublev will meet the winner of Monday’s later match between second-seeded Daniil Medvedev of Russian and 20th seed Marin Cilic of Croatia.