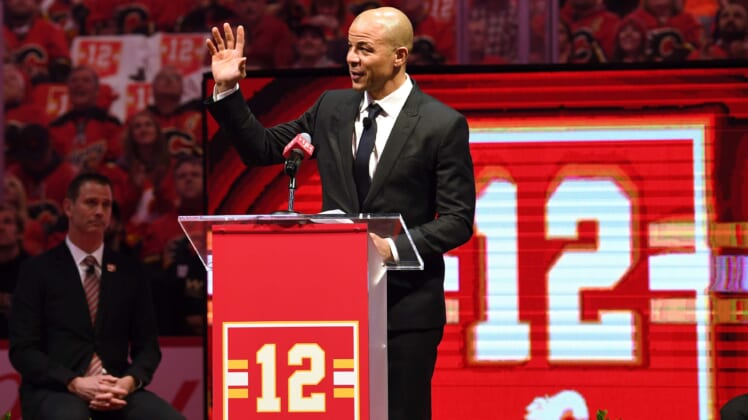 The Hockey Hall of Fame’s Class of 2020-2021 is officially enshrined in the game’s record books.

After officially receiving their rings in front of media on Friday, November 12, the inductees spent a weekend surrounded by fans, hockey personnel, family and, of course, other hockey greats. Jarome Iginla, Marion Hossa, Kim St-Pierre, Kevin Lowe, Ken Holland and Doug Wilson spent the next day, Saturday, answering fan questions, found themselves honored at a Neidermayer vs. Modano legends game on Sunday and, finally, speaking at an official induction ceremony on Monday, November 15.

Other greats of the game, including Steve Yzerman, Mark Messier and Angela James were in attendance to present this year’s Hockey Hall of Fame class with their official plaques, which are now officially hung in the Hockey Hall of Fame in Toronto, Canada.

The Legends game saw two greats, Scott Neidermayer and Mike Modano, captain Canada and World teams, respectively, and faceoff in a contest for bragging rights at Scotiabank Arena, home of the NHL’s Toronto Maple Leafs. Fans were treated to a high-scoring contest, as well as a shoot out and official merch thrown into the stands by the players. Rosters included Shane Doan, Erica Howe, Al Iafrate, Tomas Kaberle, Marcel Hossa (inductee Marion’s brother) and other fan favorites from decades past.

The next day, the red carpet was rolled out at Meridian Hall, just across the street from the physical Hockey Hall of Fame. There, Neidermayer, Brian Burke, Mike Cammalleri and other invited guests signed autographs and took media questions before filtering inside to enjoy the festivities.

Each inductee gave a lengthy speech, thanking their families, teammates, management and inspirations over the years. First up was Doug Wilson, who joined the expansion San Jose Sharks in 1991 in the team’s inaugural year. “Being on the ground floor of something brand new was very exciting to me,” he said.

He was named the team’s first ever captain after an impressive stint in Chicago, which saw many a reporter compare him to Bobby Orr. He credited a lot of his growth to his first ever NHL roommate, legend Stan Mikita. “The game of hockey is special for the people in it,” he said.

Kevin Lowe, the first ever Oilers draft pick, is the club’s all-time leader in regular season and playoff games played. He and the legendary 80s Oilers have been touted as one of the most legendary dynasties of all-time, helped in part because of one Wayne Gretzky. The Great One, he said, skated beside Lowe at one of the team’s first practices and asked him to share an apartment together.

After a historic stint in Edmonton, Lowe then went to New York to help the Rangers end a 54 year Stanley Cup drought, hoisting one of his six Stanley Cups with Mark Messier and six other former Oilers. “Maybe the Leafs should get us,” he joked.

Steve Yzerman introduced Ken Holland, who was at the helm of another NHL dynasty, the Detroit Red Wings. He was the general manager for 22 years, responsible for looking over legends like Yzerman, Nick Lidstrom, Dominik Hasek (all of whom were in attendance), Pavel Datsyuk and Brendan Shanahan. Now, in his two and a half years as the general manager of the Edmonton Oilers, Holland is tasked with overseeing two of the best players of the modern era, Connor McDavid and Leon Draisaitl. “Nothing Connor does surprises me anymore,” he said. “He’s so fun to watch.”

Kim St-Pierre, the first female goalie inducted into the Hockey Hall of Fame, is also just the eighth woman to receive the honor. She credits her outstanding career–which included gold medals for Team Canada on the international stage–to playing men’s hockey growing up. “Yes I was different, and yes I faced a lot of adversity, but I would not change a thing about my story,” she said. “I have dedicated my life to hockey which, in return, has given me everything.”

Mikita shares something in common with inductee Marion Hossa, too. Mikita, Hossa and Petr Stasny are the only three Slovaks in history to be inducted into the Hockey Hall of Fame. That fact was not lost on Hossa, who thanked them, alongside Petr Bondra, the late Pavol Demitra, and countless others for making him one of the greatest two-way players in NHL history.

Jarome Iginla closed out the speeches, discussing his time as captain of the Calgary Flames, as well as his presence on the international stage while playing for Team Canada and the Olympics. Recognized as a dynamic forward and one of the great personalities of the game, Iginla also reflected on being a player of color in the NHL, acknowledging Grant Fuhr and Willie O’Ree, who broke the color boundary in the NHL before him.

“I know that it was thanks to guys like Grant and Willie that made my dream of playing in the NHL come true,” he said. Iginla was one of the few players of color during his career, and will go down as one of the most beloved players in the league’s history.

With the 2020-2021 Hockey Hall of Fame induction ceremonies officially closed, speculation already begins about who will be inducted next year.