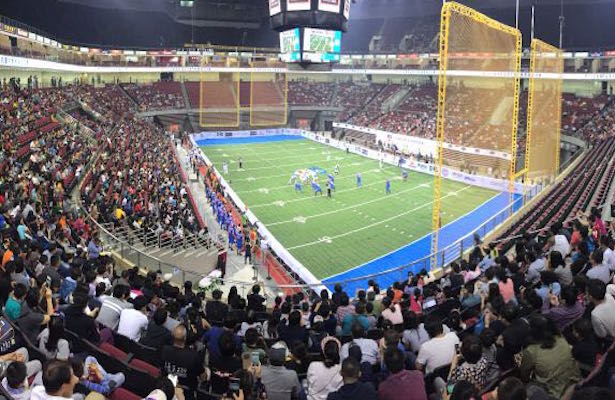 The people of China finally have a taste of American football after the first game of the new China Arena Football League took place. Granted, it’s the Arena-league style, but it’s still American football. And no one thought that it would ever see the light in China.

The LeSports Center saw the the first snap of the new Chinese Arena Football League, and Marty Judge, founder of the league, was ecstatic with the results:

“Five years ago, people laughed at me when I said I would bring American football to China” said Marty Judge, the bombastic US businessman who acted on his dream (h/t CFALFootball.com). “Take a look around you. Here we are, on the home floor of the Beijing Ducks, and the China Olympics, and they came to see us – the CAFL, how about that!”

Despite the league featuring American football, its wants to stick primarily with Chinese players. Teams have been training and grooming players for the past year at universities around the country, determining who the best of the best players are.

The Chinese people seemingly love the sport, already having filled the stadium with 11,500 fans for the first game.

As the sport grows in popularity, it will become interesting to see just how much talent the league can produce. Also, it will be fascinating to see whether it produces a player or two for the NFL to start using it as a bit of a pipeline.