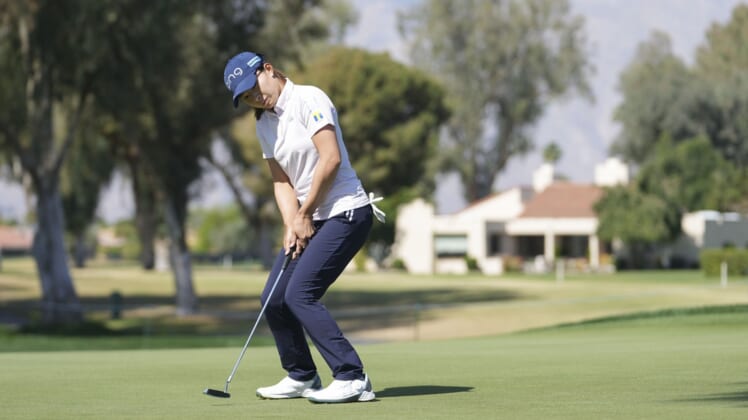 Hinako Shibuno, nearly three years removed from her lone LPGA major championship, is in position to add another.

The 23-year-old Japanese player shot a 6-under-par 66 in the second round on Friday at the Chevron Championship, leaving her at 9-under 135, good for a one-shot lead in Rancho Mirage, Calif.

First-round co-leader Jennifer Kupcho shot 70 on Friday at Mission Hills Country Club’s Dinah Shore Tournament Course, and she is tied for second with Annie Park (second-round 67) and defending champion Patty Tavatanakit of Thailand (69) at 8 under.

Two South Korean golfers, Sei Young Kim and Hyo Joo Kim, each shot 67, leaving them tied for fifth at 7 under.

The other opening-round co-leader, Australia’s Minjee Lee, slipped to a 73 on Friday, dropping her into a seven-way tie for ninth at 5 under.

Shibuno won the 2019 Women’s British Open in her major-tournament debut, but she has made the cut in just half of her eight subsequent majors. A tie for fourth at the 2020 U.S. Women’s Open was the only time since her win that since finished in the top 30 at a major.

“My game, golf game is not a lot different than I won 2019 British Open, but my personality is not different at all,” Shibuno said, adding with a laugh. I eat a lot more snacks.”

Her round included seven birdies and one bogey, but after taking the lead, she closed with five consecutive pars.

Kupcho started her day with 16 straight pars before she birdied two of her final three holes.

Park’s round was highlighted by a stretch of four birdies in a five-hole run surrounding the turn.

“It was a great day and I feel … lot better about my long game,” Park said. “Been putting a lot better. Made some really good putts out there. Did leave some out there, but overall I’m stroking it pretty solid.”

Tavatanakit got through an up-and-down round that included six birdies and three bogeys. She closed with back-to-back birdies.

She said of the positive end on the 18th hole, “Definitely a good feeling. I remember playing when I was an amateur, making birdie on that hole is always kind of a cheering feeling with everyone being around.”

The major is going by a new name this year after previously being known as the Nabisco Dinah Shore, the Kraft Nabisco Championship and the ANA Inspiration. Chevron increased the total purse to $5 million, with the winner being paid out $750,000, but the tournament will move the major away from its iconic California desert home next year.