NEW YORK (Reuters) – Highlights of the fourth day at the U.S. Open in New York on Thursday. The Grand Slam is being played without spectators due to the COVID-19 pandemic. (Times ET; GMT-4):

Former world number one Victoria Azarenka, who was beaten in three sets by Aryna Sabalenka in the opening round at Flushing Meadows last year, swatted aside her Belarusian compatriot 6-1 6-3 in their second-round clash.

Six-times champion Serena Williams moved into the third round, battling past Russian Margarita Gasparyan 6-2 6-4 under the roof at Arthur Ashe Stadium. Williams will next face Sloane Stephens in a battle of former champions.

2050 MEDVEDEV EASES INTO ROUND THREE

Russian Daniil Medvedev, who finished runner-up to Rafa Nadal last year, cruised into the third round with a 6-3 6-2 6-4 victory over Australia’s Christopher O’Connell in a match that was played under the roof at Louis Armstrong Stadium.

The tournament organisers confirmed matches on the outside courts have been postponed and rescheduled for Friday after play was suspended due to heavy rain at Flushing Meadows.

1810 STEPHENS ADVANCES TO THIRD ROUND

American Sloane Stephens cruised into the third round with a 6-2 6-2 victory over Olga Govortsova. The 2017 champion struck 22 winners and four aces past her Belarusian opponent in the 65-minute match.

Stephens will face compatriot Serena Williams in the next round if the third seed beats Russia’s Margarita Gasparyan later on Thursday.

1712 BERRETTINI THROUGH TO THIRD ROUND, RAONIC OUT

Sixth seed Matteo Berrettini of Italy moved into the third round after beating Ugo Humbert 6-4 6-4 7-6(6), firing 17 aces and 48 winners past the Frenchman.

In an all-Canadian clash, unseeded Vasek Pospisil came back from a set down to eliminate 25th seed Milos Raonic 6-7(1) 6-3 7-6(4) 6-3, dominating at the net where he racked up 27 points in a match lasting over three hours.

1555 THIEM RACES PAST NAGAL TO SET UP CILIC CLASH

Second seed Dominic Thiem served up a masterclass of ball striking and placement as he defeated Indian Sumit Nagal 6-3 6-3 6-2. The Austrian will next face 2014 champion Marin Cilic, who overcame Slovakia’s Norbert Gombos 6-3 1-6 7-6(2) 7-5.

1450 RUBLEV RACES INTO ROUND THREE

1336 KENIN, KHACHANOV CRUISE INTO THIRD ROUND

Second seed Sofia Kenin moved into the third round with a 6-4 6-3 victory over Leylah Fernandez, smashing 19 winners past her Canadian opponent and breaking her three times without dropping serve.

Karen Khachanov also advanced with a straight sets victory over fellow Russian Andrey Kuznetsov, winning 6-3 6-4 6-1 with an 83% success rate on his first serve.

Amanda Anisimova, 19, fought back from a set down against 16-year-old Katrina Scott to advance to the third round with a 4-6 6-4 6-1 victory over her fellow American.

Scott, making her Grand Slam debut, raced into a one-set lead on the back of her booming serve before Anisimova took control at 4-4 in the second set. The 22nd seed will next face Greek 15th seed Maria Sakkari.

Spain’s 10th seed Garbine Muguruza was knocked out 7-5 6-3 by unranked Bulgarian Tsvetana Pironkova in the second round.

Playing in her first tournament in over three years following a maternity break, Pironkova won an overwhelming 93% of her first serve points, breaking the twice Grand Slam champion three times.

Play began in bright sunshine in New York with the temperature hovering around 26 degrees Celsius (78.8°F), with an expected high of 31 degrees. 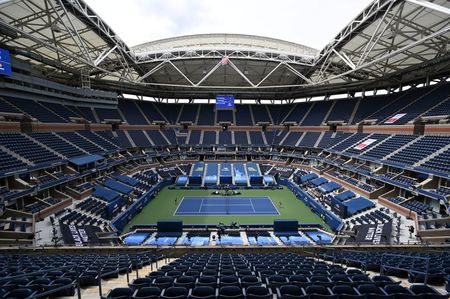 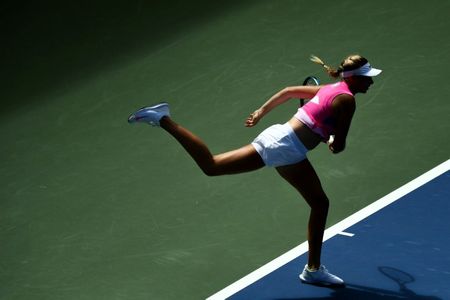 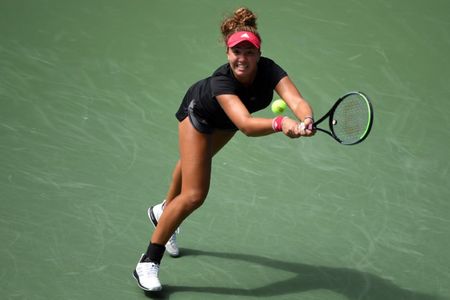