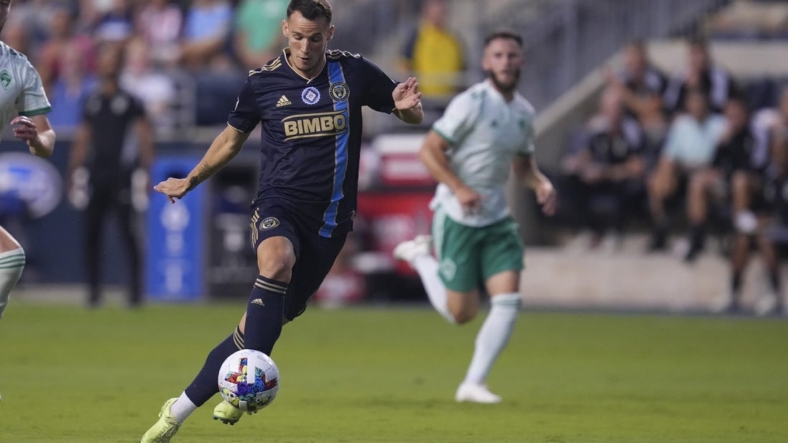 Daniel Gazdag was an obvious choice for Major League Soccer Player of the Week.

Gazdag registered the first hat trick of his career and the Philadelphia Union pummeled the Colorado Rapids 6-0 on Saturday.

The midfielder will now look to lead the Union (15-4-9, 54 points) into uncharted territory when they host Atlanta United on Wednesday.

The Union have won consecutive games by a 6-0 margin and they’ll now aim to set a league record for the most goals scored in a three-game span. The Los Angeles Galaxy scored 15 goals in three games in the 1998 season.

“I’m so happy,” Gazdag said. “This is my first hat trick so far in my career, so obviously I’m really happy with it. … But I don’t want this to stop now. I want to keep this going until the end of the season and through the playoffs.”

The Union are also one goal shy of the franchise record for goals scored in a season at 57. The 2019 team scored 58 goals.

Philadelphia has compiled four wins by six goals or more this season. No other club has had more than three such wins in a year in MLS history.

“They don’t happen much,” Philadelphia head coach Jim Curtin said. “I think I only played in a small, small amount. … To have it happen multiple times now, it speaks to this team. I’m just the coach, but players are the ones that win games. Players get it done on the field.”

While the season has been rather frustrating, Atlanta United (8-9-10, 33 points) will now hope to extend their unbeaten streak to three.

It was the first time this season that Atlanta United earned a win (1-8-3) after the opponent scored first. They moved three points behind Columbus for the final playoff spot in the Eastern Conference.

Atlanta, however, hasn’t won two in a row all season.

The urgency has been evident, most notably with the combination of Josef Martinez and Brooks Lennon. Martinez scored a game-tying goal and Lennon had a clutch assist against D.C. United.