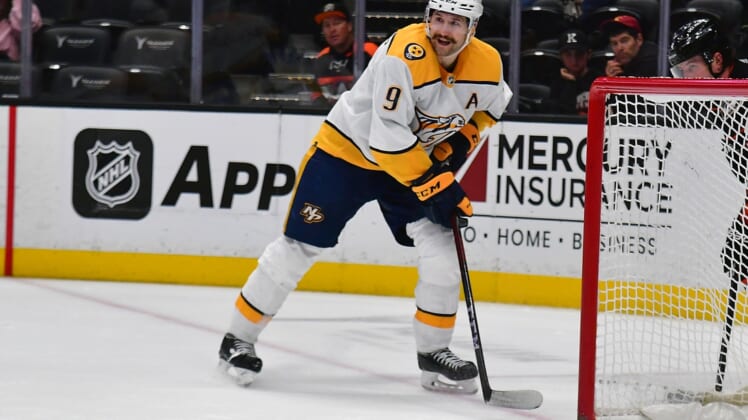 Injuries have sent the Los Angeles Kings spiraling into another rut with 18 games remaining on the regular-season schedule. The Kings will try to start digging themselves out when they host the Nashville Predators on Tuesday night.

The Kings have lost four of their past six games (2-3-1) to hinder their chances of solidifying a berth in the Western Conference playoffs.

Los Angeles still leads the Edmonton Oilers by one point for second place in the Pacific Division, but the Kings might not be healthy for a while.

Prized defenseman Drew Doughty has been sidelined two weeks with an undisclosed injury and remains “a ways away” from returning, according to coach Todd McLellan.

Viktor Arvidsson, who is tied for second on the Kings with 38 points (18 goals, 20 assists), is expected to return to practice later this week after missing the past two weeks with a lower-body injury

Los Angeles defensemen Tobias Bjornfot and Matt Roy and forward Brendan Lemieux should be back by the end of the month, while forwards Dustin Brown and Andreas Athanasiou and defenseman Mikey Anderson are much further away from their returns.

McLellan has been forced to reach deep into the organization for replacements.

“Regardless of who’s in the lineup and who isn’t, this is a great opportunity for our veterans to be reminded how hard it is, and our newcomers, or our kids, to experience it,” McLellan said. “It’s a different league than it was a month ago, or in November, and certainly in October.”

Los Angeles is coming off a 5-1 road loss to the Vegas Golden Knights on Saturday. The Kings have had two days between games, a break they experienced just one other time since a three-day rest Feb. 20-22, and one they needed.

“We need to clean some things up and then it’s right back at it,” McLellan said after the loss to Vegas. “It’s that way for the remainder of the season.

“If you’re not learning verbally or through your eyeballs, you’re probably not going to get a lot of reps in practice to get better. We need players that are able to grab concepts and put them into play without really feeling them.”

Kings forward Phillip Danault scored his 19th goal of the season on Saturday, second most on the team this season and a career high.

The Predators have won four of five following a 6-3 road victory over the Anaheim Ducks on Monday. They are tied in points with the second-place Minnesota Wild in the Central Division, but Nashville has played two more games.

Filip Forsberg scored an empty-net goal in the final minutes to set the Nashville franchise single-season record with 35 goals. Matt Duchene had scored twice Monday to give him 34 goals, momentarily tying him with Forsberg as they looked to top the mark of 34 set by Arvidsson in 2018-19.

Roman Josi and Duchene each bring a 10-game point streak into the game against Los Angeles.

Josi has four goals and 20 assists during his streak. Duchene has 11 goals and nine assists in his surge.

“We’ve gone back and forth quite a bit,” Duchene said. “The great thing is, we’re pushing each other. If you’re going to achieve greatness, you might as well do it together.”

Duchene extended his point streak with a highlight-reel goal against the Ducks in which he pulled the puck between his legs and scored with a backhand.

“I haven’t worked on that since I was kid,” Duchene said. “First time I’ve scored like that in the NHL.”

The Predators arrive in Los Angeles having scored at least four goals in seven consecutive games, the longest such streak in franchise history.