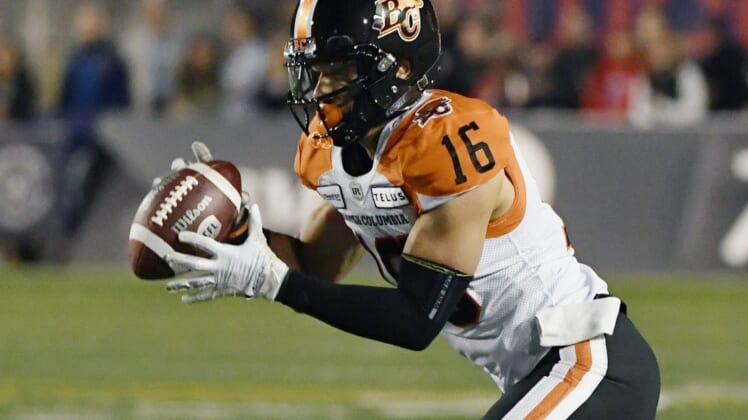 The Ottawa Redblacks hope to end their touchdown drought Thursday night when they play host to the high-scoring B.C. Lions.

The Redblacks (0-2) have scored just one touchdown so far in back-to-back losses to the Winnipeg Blue Bombers in which they were outscored by a combined 38-29.

The Lions (2-0) have outscored the opposition 103-18 in their first two games, including a 44-3 victory over the visiting Toronto Argonauts on Saturday.

B.C. quarterback Nathan Rourke was 39-for-45 for 436 yards and four touchdowns against Toronto. The passing yards set a CFL record by a Canadian quarterback. Rourke is a Victoria, B.C., native.

Redblacks quarterback Jeremiah Masoli has passed for 380 and 331 yards, respectively, in Ottawa’s two games this season. He has produced only one TD, however, on a 20-yard toss to Shaq Johnson. Lewis Ward has kicked seven field goals.

“We’ve had our opportunities,” Masoli said. “It’s nothing we need to throw away the playbook over. It’s just us executing at a higher level and doing some things better.”

Ottawa is not overlooking B.C.’s defense.

“When you play a team that doesn’t give up a lot of points, you have to make sure you get your sevens,” Redblacks head coach Paul LaPolice said. “The B.C. Lions are really good on defense. So you have to get your points when you can.”

The Lions will be without receiver Bryan Burnham, who suffered broken ribs from a hit just before halftime on Saturday.

“He will be back, which is good news,” Lions coach Rick Campbell said. “We just have to be patient on this one but we expect him to play a lot of meaningful football for us, and especially in the second part of the season.”

Burnham has been a CFL All-Star four seasons in a row.

Rookie Josh Pearson is expected to take Burnham’s spot on the roster for Thursday. He’s yet to see action for B.C.

Ottawa will be without defensive back Abdul Kanneh (ankle).