Hideki Matsuyama shot a 5-under-par 65, capped by an eagle on the final hole, to record a five-stroke win on Sunday in the Zozo Championship in Chiba, Japan.

Matsuyama, who won the Masters in April, finished at 15-under 270 to earn his first title on home soil at Narashino Country Club.

It’s the seventh PGA title for the 29-year-old Japan native, who was coming off a disappointing finish at The CJ Cup @ Summit last week. He now trails K.J. Choi for most career PGA titles by an Asian player by one.

Matsuyama had an eagle and a bogey on the front nine, but found his groove on the back nine by picking up three birdies in five holes. 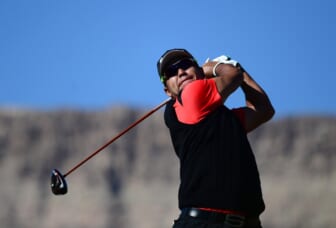 After a bogey on No. 17, Matsuyama sent his second shot on the par 5 No. 18 to within 12 feet of the hole before nailing the eagle putt.

“It was one of my biggest goals to win in front of the Japanese fans here in this country as well,” said Matsuyama, who finished runner-up to Tiger Woods at the inaugural Zozo Championship in 2019.

“Also, in 2019 Tiger won the Masters and went on to win the Zozo Championship, so I’m glad that I would be able to emulate that as well.”

Cameron Tringale, who started the day one shot behind Matsuyama and briefly led on Sunday, bogeyed the final two holes to finish at 1-under 69 and in a tie for second at 10-under 270 overall.

“To really slam the door and hit an incredible second shot (on 18) and hole the putt, it was storybook,” Tringale said of Matsuyama’s performance.

Tringale has now finished runner-up four times while competing in his 314th start of his career.