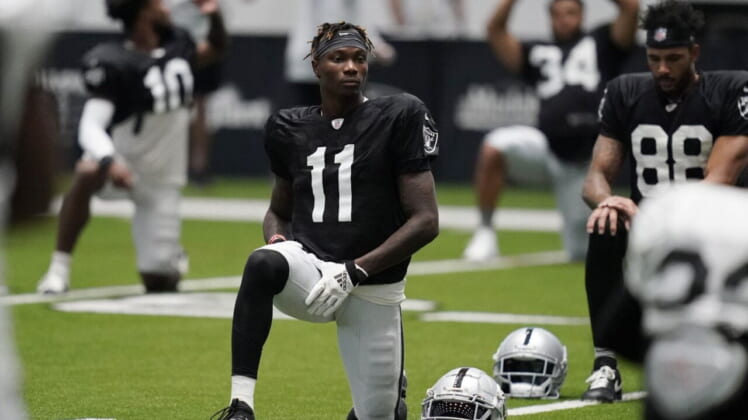 Speaking with us on Silver and Black Today on Raider Nation Radio 920, former first-round draft pick Mike Pritchard says Henry Ruggs speed and his experience at Alabama will lead to a quick acclimation process in Raiders training camp.

Mike Pritchard knows what it’s like to be a first-round draft pick in his first week in the NFL. The 13th overall pick of the Atlanta Falcons in the 1991 NFL Draft, Pritchard has been there and done that. When asked about Las Vegas Raiders wide receiver Henry Ruggs speed, ability to acclimate to the NFL, and if he could do it, Pritchard doesn’t see any problems for Ruggs as Raiders training camp goes on.

“He’s an athlete,” Pritchard said. “Once he gets wide receiver down in the National Football League, I think the sky’s the limit.”

While the spotlight of the NFL is bright, Pritchard believes Ruggs, having spent his college years at Alabama fighting for a national championship every year, have more than prepared him for the pressure of the NFL. As a young player playing in the SEC, he knows what it takes to perform at a high level under extreme pressure.

“If you think about the Clemson guys or the Alabama guys, these guys are used to playing for championships,” Pritchard said. “I expect Henry Ruggs to have that work ethic and understand that and if he’s slacking at all, or behind a step, he’ll make up that ground because he knows what he needs to do get there.”

For Pritchard, the focus and attention on you as a first-round draft pick are certainly a change but it’s something you adapt to and actually desire as a player.