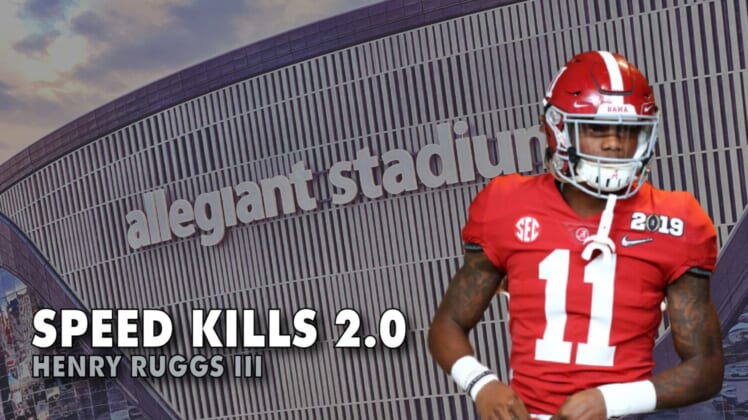 While most NFL Draft analysts pegged Henry Ruggs III the third-best wideout available on Thursday, the lighting-fast and durable Alabama product instead went first too the Las Vegas Raiders and the young receiver is excited to prove his worth.

With the NFL Draft being held virtually this year, the usual suit and tie getup for Las Vegas Raiders first-round pick Henry Ruggs III wasn’t going to be in the cards. Instead, clad in a white Old Spice bathrobe, the super-fast former Alabama Crimson Tide wide receiver was selected No. 12 overall to become the first-ever Las Vegas Raiders draft pick. When asked why he wore a bathrobe during his big moment, Ruggs offered a simple answer.

“It was comfortable,” Ruggs III said in a subsequent interview.

Who won’t be comfortable are AFC West defensive backs. With Ruggs III and former Alabama teammate Jerry Jeudy now in Denver, two of the college ranks top receivers now call the division home. Ruggs III’s blinding 4.27 40-yard dash, coupled with his threat on the outside, gives the Raiders a weapon they haven’t had in quite some time.

“When you’re in the division we’re in and you look at Kansas City and you look at what they have on offense and what their explosion looks like, we needed to get faster and we think that his addition opens up our entire offense,” Raiders general manager Mike Mayock said about the Ruggs III selection. “He can run the deep routes. He also gets the manufactured touches, the bubble screens, the jet sweeps. I think if you force defenses to roll coverage, it opens up our run game. You respect our deep routes, it opens up Darren Waller. I just think it does an awful lot of things for us offensively and I think the most important thing is I think Coach Gruden and the staff will get everything out of him.”

Often compared to Kansas City’s Tyreek Hill, Ruggs isn’t just a flash-in-the-pan speed demon. In his three seasons at Alabama, paired with his fellow first-round pick Jeudy, Ruggs compiled just 98 catches for 1,716 yards. Yet when he did catch the ball in college, more times than naught it resulted in a touchdown. In fact, every 4.1 receptions for Ruggs in 2019 resulted in a touchdown. On a team in need of a boost in scoring, Ruggs’ ability and propensity to score when he makes the catch are what matters.

When asked by the media late Thursday what he brings to the Raiders, Ruggs was straight to the point.

“I bring an explosive playmaker, a great receiver, a great all-around receiver,” Ruggs said. “A guy that can make a positive impact.”

Even though Ruggs and his speed tend to grab the headlines, his ability to run routes effectively, creates separation with his extra gear of speed, he keeps corners off balance giving him a distinct advantage every time he lines up.

“Of course, my tape speaks for myself,” Ruggs said of his speed what how it helps his game. “But when I get out on the field, I can show that I can do more than just run.”

Despite the undeniable talent and ability Ruggs displayed at Alabama, many still think Jeudy or CeeDee Lamb, who went to the Cowboys at No. 17, was a better choice as Las Vegas chose at No. 12. But in revisiting our story on March 13, 2020, when we said Ruggs was a better option for Gruden’s Raiders, sometimes statistics don’t tell the whole story.

When you’re in the division we’re in and you look at Kansas City and you look at what they have on offense and what their explosion looks like, we needed to get faster and we think that his addition opens up our entire offense – Raiders general manager Mike Mayock

Pro Football Focus’ Timo Riske ran some interesting analysis of Ruggs and Jeudy from last season and concluded this: Ruggs offers a more consistent and explosive deep threat compared to his teammate Jeudy.

According to the attack zone heat maps below, Ruggs (left – red area) lined up primarily on the right side of the field and attacked outside the hash marks far more frequently than Jerry Jeudy (right) did. Both charts show excellent performance by both players outside the hash marks but with Ruggs more consistent further downfield.

It’s worth noting, as Riske did in his analysis, Jeudy was lined up mostly in the slot last year at Alabama while Ruggs lined up to the right, outside, most of the time. That might explain a bit of the Ruggs advantage in his chart, but not enough to change the overall outcome.

For the first time, Ruggs will be the guy in Las Vegas. At Alabama, he was surrounded by talented teammates like Jeudy so wasn’t always the focus of the offense. Now, he becomes quarterback Derek Carr’s big target downfield and the focus of the Raiders vertical offense.

Ruggs said he talked with current Raiders and former Alabama running back Josh Jacobs who gave him sound advice.

“He was telling me to be ready. You never know what is going to happen,” Jacobs advised Ruggs. “He said: ‘Be ready for anything. Whenever you get to wherever you’re going, just do your thing. You got it.’ He knew that I was ready, so that was pretty much it.”

The history of the moment – for the Raiders franchise and for the player – were not lost on Ruggs. Being the first-ever pick of the Las Vegas Raiders was something he knew was very special.

“It means a lot. Just that they used their pick on me for the first wide receiver and first draft pick in Las Vegas,” Ruggs said. “That’s big with me. I’m excited. I’m ready to go. I can’t wait to get there and get to work.”