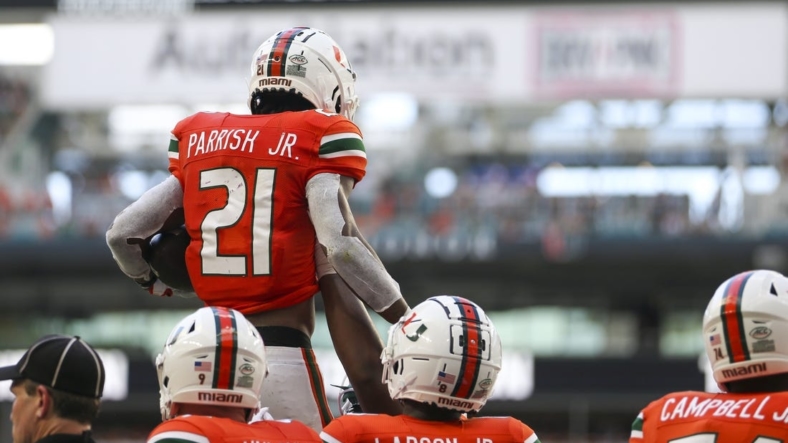 Henry Parrish Jr. scored three first-half touchdowns in his Hurricanes debut as 16th-ranked Miami defeated the visiting Bethune-Cookman Wildcats, 70-13, on Saturday afternoon in the season opener for both teams.

It was also a happy debut for Mario Cristobal, who enjoyed his first game as Miami’s coach.

Other than a fumbled snap and running out of time at the end of the game, Miami scored a touchdown on its other nine possessions, and that excluded a defensive score on Gilbert Frierson’s 32-yard interception return. A deflection by Miami defensive lineman Akheem Mesidor set up that play.

Canes quarterback Tyler Van Dyke, a projected NFL first-round pick in 2023, completed 13-of-16 passes for 193 yards and two touchdowns. He was not intercepted and played just 2 1/2 quarters.

Slot receiver Xavier Restrepo had five catches for 100 yards and one touchdown to lead Canes pass-catchers.

Bethune-Cookman was led by quarterback Jalon Jones, who completed 11-of-20 passes for 243 yards, one touchdown and one interception.

Parrish, who is from Miami but arrived on the Hurricanes roster after transferring from Ole Miss, ran 14 times for 108 yards. He started in place of Jaylan Knighton, who was rested.

Bethune-Cookman scored on the game’s initial possession as Jones completed 4-of-5 passes for 72 yards, leading to Dylan Moghaddam’s 29-yard field goal. BCU overcame three penalties on that drive and might have had a touchdown if not for a strip at the goal line by Miami linebacker Waynmon Steed Jr.

Miami took a 7-3 lead on its first possession. Key’Shawn Smith ran the kickoff 70 yards, and the Canes scored on Thad Franklin’s four-yard run. All 30 scrimmage yards came on runs.

BCU never led again as Miami’s offense dominated the rest of the half, grabbing a 42-10 lead at the break.