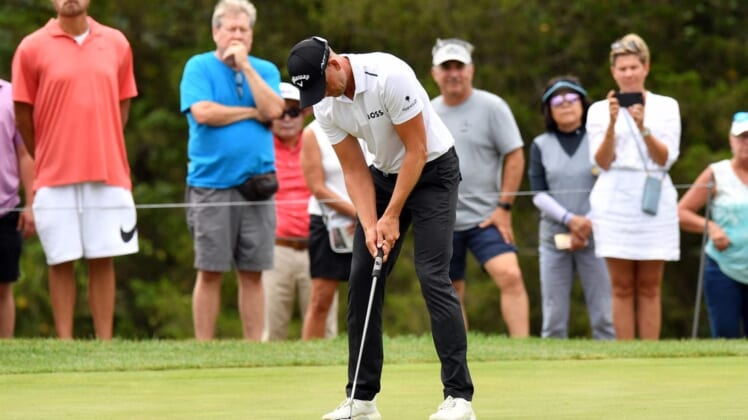 Sweden’s Henrik Stenson, who was fired as Europe’s Ryder Cup captain after joining the LIV Golf Invitational Series, enjoyed a strong debut on the Saudi-backed tour on Thursday in Bedminster, N.J.

Stenson shot a 7-under-par 64 at Trump National Bedminster to share the first-round lead with Patrick Reed.

Stenson carded four birdies on each nine and a lone bogey at the par-3 seventh hole.

“It is a tough golf course, and I mean, I felt extremely focused today, and I was right into my game,” he said. “You can’t ease off on your concentration around here.

“Yeah, good crowd support out there, and like I said, it’s only the first round that we’ve played, so yeah, I should be able to give you better feedback as we move along and I’ve played a few more rounds. If I continue to shoot 7 under it’s going to be a good one.”

Reed logged five birdies in a six-hole span from Nos. 4-9 after recording his lone bogey of the day at the par-4 third hole.

“I felt like I left myself below the hole most of the day so I was able to be aggressive with the putter, and with how pure these greens are, once one goes in, it kind of felt like I was able to kind of get on that run.”

Thailand’s Phachara Khongwatmai holds third place at 5 under, and Dustin Johnson and Mexico’s Carlos Ortiz are tied for fourth at 4 under.

Phil Mickelson is tied for 43rd in the 48-player field at 4 over. He was heckled on the first tee by a fan mocking the circuit’s connection to the Saudi royal family.

In the event’s team format, 4 Aces GC, featuring Johnson, Reed, Pat Perez and Talor Gooch, are in first place at 11 under. Majesticks GC, consisting of Stenson, Poulter and Englishmen Lee Westwood and Sam Horsfield, hold second place at 10 under.