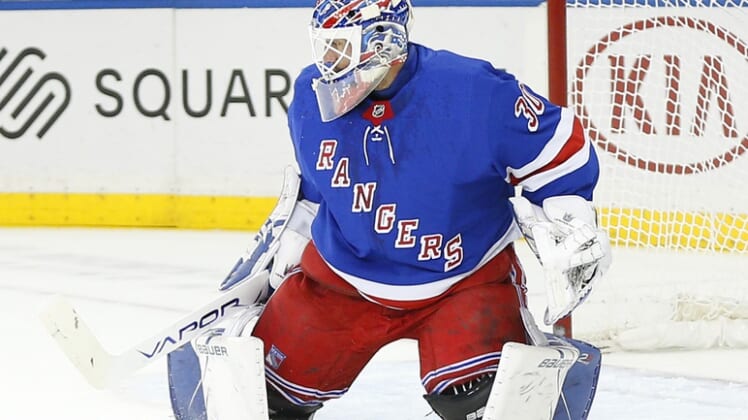 This article originally appeared at Forever Blueshirts this morning.

Dejection, disbelief, defeat. Those words best describe the looks on the faces of every member of the Rangers last night. A look that was epitomized on the face of the franchise, Henrik Lundqvist after the sweep by the Hurricanes.

No one last night wanted to talk about this being a “good experience”. In truth, it was not. The Rangers were exposed for being a team that was not ready for prime time, and it wasn’t because 11 players made their playoff debuts.

New York’s biggest issue was sloppy play and coverage in their own zone. While there is a lot of promise in Adam Fox and Ryan Lindgren, the others struggled, in particular Marc Staal and Brendan Smith who turned over the puck too often and at the most in opportune times. Neither of them are rookies.

Ultimately, the biggest question facing the team is addressing the three-headed monster in net. In the NHL, two’s a company but three’s a crowd.

Henrik Lundqvist will be 39 years-old next season. Although he was not the issue, he did let in a few soft goals early that put the Rangers behind the 8-ball. Against the Hurricanes, that was insurmountable.

Of course, these two games against Carolina were only a verification of the slow decline in his game over the last two seasons. Don’t get me wrong, Hank can still play, but he needs to be on a legit contender that can play solid defense.

“He battled his ass off like he always does,” a saddened Chris Kreider said after the series. The longtime teammates went to war together for some of the great runs in Rangers history from 2012-2015. “He deserved better from us.” Kreider finished. Truer words have never been spoken.

Now the question remains, what will Henrik Lundqvist and the Rangers decide to do. Before COVID-19, there was talks of a buyout of his final year or possibly a trade. I don’t think a buyout is in the cards, as it will only save them around $3 million on his $8.5 million deal. While a trade could be figured out, this is a whole new world with a flat cap. Other contenders may not be able to afford him.

Here’s the other factor, the next NHL season is going to start almost four months from now. Lundqvist who spent a lot of time in Sweden during the pause practiced with his brother Joel at Frolunda’s training facility.

Here’s what I know, the SHL season will start before the NHL’s. Henrik Lundqvist may very well retire and join his brother for one season with Frolunda. After that, he could make one last ditch for the Cup with a contender at 40.

A Lundqvist retirement will be a final gift to a franchise he’s given so much to. Should he do so, the Rangers will regain the full $8.5 million. Don’t get it wrong, Henrik wanted to finish his contract here, but the fallout from the pandemic may have changed his plans.