Hendrick Motorsports expected to change the No. 88 to No. 5?

With the rumors of a possible number change for Hendrick Motorsports, former NASCAR legend Dale Earnhardt Jr. has been hearing the same. 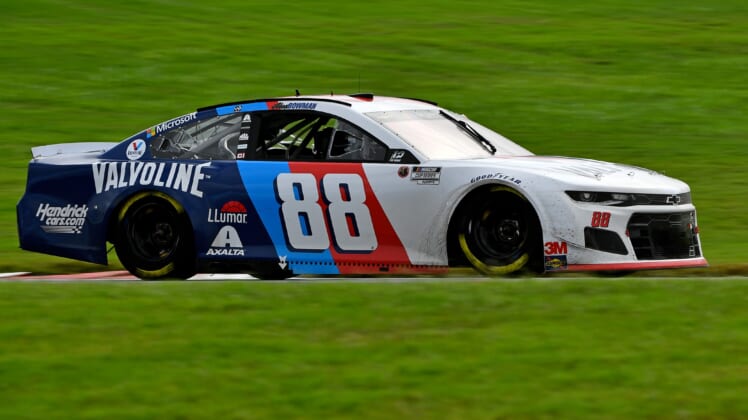 When it was announced that Alex Bowman would move over to the No. 48 for the 2021 season, rumors began to circulate over the status of the fourth Hendrick Motorsports car. Several number changes have been rumored, such as the No. 5, 25, 57, and 88. However, Hendrick Motorsports may have already made their decision.

According to former NASCAR legend Dale Earnhardt Jr., Hendrick Motorsports may be changing the No. 88 car to the No. 5 car. Earnhardt Jr. brought the No. 88 there in 2008 and ran the number until his retirement in 2017.

“It also opens up the door for them to bring in whoever their next driver is. That will feel out the No. 88, which I think is switching over to No. 5. That’s at least what I’ve been hearing.” – Dale Earnhardt Jr.

Erik Jones as the leading candidate to replace Bubba Wallace at Richard Petty Motorsports, leaving Kyle Larson as the lead driver to take over the fourth Hendrick Motorsports car in 2021. Here is why bringing the No. 5 back would be the right decision for the organization.

The history of the No. 5 with Hendrick Motorsports

The No. 5 car has been a staple of the Hendrick Motorsports brand since its debut in 1984. Geoff Bodine drove the car from 1984-’89, accumulating seven wins. Ricky Rudd replaced Bodine from 1990-’93. Rudd, one of NASCAR’s best road course drivers, won four races in his four-year stretch.

One of the most successful runs of the No. 5 was Terry Labonte from ’94-2004. Labonte won one championship in 1996 and earned 12 wins throughout his tenure at Hendrick Motorsports. Once Labonte retired from full-time racing, Hendrick Motorsports pegged development driver Kyle Busch as his replacement. Busch won four races from 2005-’07, before Hendrick Motorsports let the future superstar go. It would be one of the biggest mistakes the team made.

Casey Mears would drive the No. 5 for one year in 2008 when he finished 21st in the standings. Mark Martin replaced Mears after leaving Dale Earnhardt, Inc. after the conclusion of the 2008 season. Martin would win five races in his first year and finish second in the standings. Brad Keselowski was promised the No. 5 for the 2010 season, but Rick Hendrick broke his promise and brought Martin back.

Kasey Kahne would take over the No. 5 in 2012 when Martin retired from full-time racing. Kahne would go on to win six races in the six years he drove there. After the 2017 season, it was announced that Hendrick Motorsports would change the numbers on the team. Chase Elliott’s No. 9 replaced Kahne’s No. 5 and it has not changed since.

Kyle Larson must create his own brand and image

Kyle Larson has been experiencing one of the most difficult years of his life after being suspended due to an iRacing incident in April this year. Larson has been working to improve himself since the incident and even had an interview on “CBS This Morning” Friday morning. However, a return to NASCAR should be coming shortly.

Larson is the leading candidate for the fourth car at Hendrick Motorsports. It is only a matter of time before the news is announced, whether it is this week or after the season. The 28-year-old driver is one of the most talented drivers in the world and should be able to compete for championships right away. With Larson expected to stay with Hendrick Motorsports long-term, a rebrand of the fourth car is in order.

“I think they’re going to change the number on the No. 88 and rebrand, relaunch that whole fourth team.” – Dale Earnhardt Jr.

Larson started racing full-time for Chip Ganassi Racing in 2014 and gradually ran better each year up until his suspension. Chip Ganassi Racing does not have the type of equipment that Hendrick Motorsports runs, which means there is much more room for improvement. Larson was always due for an improved ride, but not under these circumstances.

Now that Larson has learned his lesson and grown as a person, creating his own image is important. The No. 88 will always be Dale Earnhardt Jr’s car and be in association with him. Larson driving a new number with possibly new sponsors could establish his legacy in a rebranded car. A fresh start for Larson and Hendrick Motorsports would also bring new life to the team.

Hendrick Motorsports has a long line of history with the No. 5 car. With multiple wins and a championship, it is only right to bring back the number for Kyle Larson in 2021. The No. 88 will always be Dale Earnhardt Jr’s number. He brought it to Hendrick Motorsports and it is the perfect opportunity to make the change.

Larson should be at Hendrick Motorsports for the foreseeable future. Even though it will most likely be a one-year deal, giving Larson the opportunity to return in good equipment under these circumstances, has the feel of a long-term relationship. They would not jump through all of these hurdles with sponsorship and PR hits for this to be a one-year thing.

Earnhardt Jr. would not make the comment about his old number being changed if he did not have the inside track on it. If changing the No. 88 to No. 5 for Larson is what happens, it is certainly the right move for everyone involved.