Hendon Hooker leads No. 3 Tennessee’s dismantling of No. 19 Kentucky 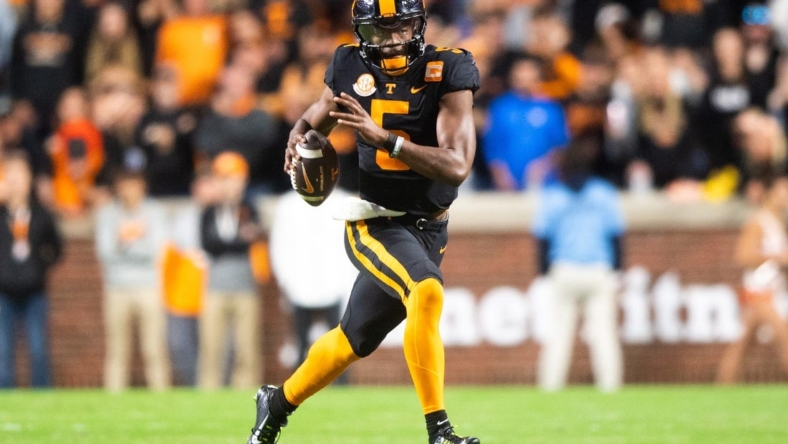 Hendon Hooker accounted for four touchdowns Saturday night, Jalin Hyatt set a school record for most receiving touchdowns in a season and No. 3 Tennessee outclassed No. 19 Kentucky across the board in a 44-6 Southeastern Conference rout in Knoxville, Tenn.

Hooker played an efficient game, completing 19 of 25 passes for 245 yards and three touchdowns with no interceptions. Hyatt caught five passes for 138 yards and two scores, giving him 14 and breaking Marcus Nash’s 25-year old record of 13.

Equally as impressive was the performance of the Volunteer defense, which looked ready for next week’s challenge at No. 1 Georgia. Tennessee allowed just 205 total yards and 14 first downs while picking off Wildcats quarterback Will Levis three times.

Levis, considered a possible first round pick in next year’s NFL Draft, completed 16 of 27 passes for only 98 yards while absorbing four sacks.

Hooker and Hyatt wasted no time putting their stamp on the game. They hooked up for a 55-yard touchdown strike just 1:27 into the evening, electrifying a sellout crowd at Neyland Stadium.

Kentucky (5-3, 2-3) scored its only points at the 4:44 mark of the first quarter on a 3-yard run by Chris Rodriguez. But the extra-point kick was blocked and that’s as close as it got to playing with the high-flying Volunteers.

Tennessee (8-0, 5-0) established firm control with 20 second-quarter points. Princeton Fant rushed for a 2-yard touchdown on the period’s first play, followed by Jaylen Wright’s 1-yard run less than four minutes later. Hyatt caught a 31-yard scoring strike with 22 seconds left in the half for a 27-6 halftime lead.

Any thoughts of a dramatic Wildcats rally ended with Chase McGrath’s 29-yard field goal and Hooker’s 8-yard touchdown run that upped the Volunteers’ advantage to 37-6 with 3:58 left in the third quarter.

Hooker capped the scoring with a 13-yard scoring strike to Jabari Small at the 7:47 mark of the fourth period.