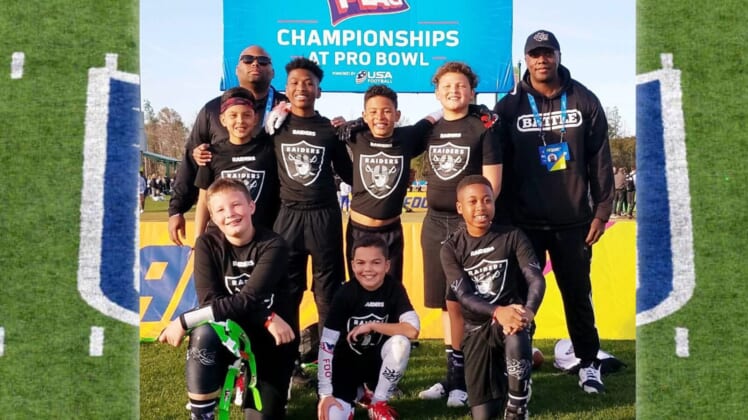 When Omar Smith, a 13-year veteran corrections officer for the City of Las Vegas, looked into coaching his son’s flag football team a few years ago, he never expected to one day be hoisting a national championship trophy at the Pro Bowl in Orlando.

Smith’s Apex Raiders (who are called the Apex Predators most of the time), a group of 9- to 10-year-old coed youth flag players, came home to Henderson this week after winning its age division’s national championship as part of the Pro Bowl festivities at the NFL FLAG Championships. The competition was sponsored and run by USA Football.

The Apex Raiders bested top teams from around the US all while wearing the uniforms of its future home team – the Raiders.

“When I got into this I never knew flag football was this big nor that it had such a big stage,” Smith said. “I grew up with tackle football so when I first got into it with my son, I realized we wanted to do more and go the club route.”

Smith started with his son (who is now 12) and invited families to join him in a more rigorous and focused club concept, playing tournaments and filling his team with good kids and good families.

Henderson’s Apex Raiders faced off against the best competition on the nation.

“We really got into it and the families really supported what we were doing,” said Smith, who doesn’t charge his kids club fees to play on the Predators. “We’re up training at 5:30 am and we’re also very involved with the community getting the kids out to Three Square (a local food bank). The kids and parents are all very dedicated – as is the coaching staff.

Smith is assisted by coach Nathan Richmond on the 9-t0-10 coed team.

This was the second year in a row the Apex Raiders made it to the national championship in Orlando. Last year, the team was a bit distracted by their surroundings and didn’t bring home the hardware. Despite not winning it last year, the experience and a glimpse at the nation’s best teams was a primary reason the team returned to Southern Nevada this year at the top of the heap.

“We won the regionals in San Diego last year but just couldn’t win it in Orlando last year,” Smith said. “But we were on the sideline for the Pro Bowl halftime when we saw the winning team from Arizona get introduced. I turned to my quarterback Vince (Hales) and told him and the kids that’s where we want to be next time. This time, it happened.”

Smith’s team had not lost a game since August of 2018 heading into the weekend and was led by game MVP and wide receiver/defensive back Kory Villareal. The Apex Raiders also include Andrew Campbell, Justin Colin, Vincent Hales, Andrew
Richmond, Michael Sims, and Jett Washington.

Smith, who is a Bay Area native, has worked hard to build his flag program into a positive place and experience. He even secured the team a lucrative sponsorship from Battle Sports Science – a first for a flag club program.

“It’s nice to see the kids, parents, and coaches all build this thing into a national power,” Smith said.

For more information on the Apex Raiders/Predators Football, visit then on the web: www.apexpredatorsflagfootball.com

For information on USA Football: https://www.usafootball.com/

NOTE: Join Coach Omar Smith on the Silver and Black Today radio show on CBS Sports Radio 1140-AM this Sunday from 8-10 am live from the Downtown Las Vegas Events Center for the Biggest Big Game Bash. Coach Smith will tell our listeners about his team’s whole journey and more. You can stream the show live on the Radio.com app or over the air!