Helmets, fists fly as Rams and Bengals brawl in practice 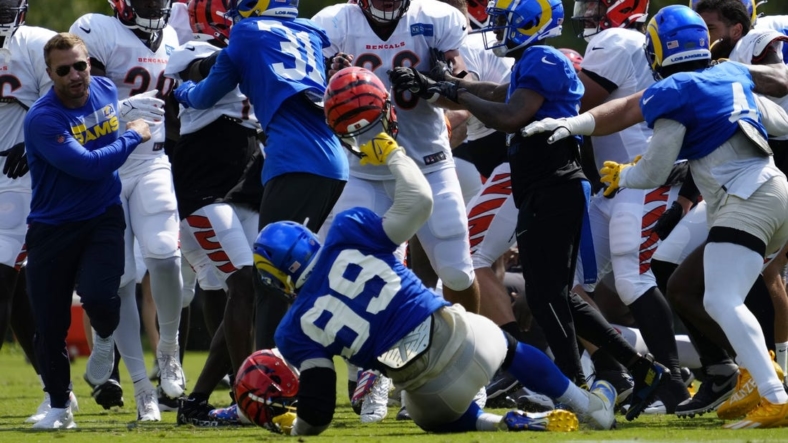 Fists — and helmets — were flying Thursday at a fight-filled practice session between the Los Angeles Rams and host Cincinnati Bengals.

The explosive reunion of last season’s Super Bowl participants ended early after the third scuffle of their second day of joint practices.

Video and photos of the incidents showed Rams star Aaron Donald holding Bengals helmets in both hands and repeatedly swinging one of them during a scrum before getting knocked to the ground.

Donald, a three-time NFL Defensive Player of the Year, declined to comment through a team spokesman.

Bengals offensive tackle La’el Collins also appeared to remove and throw the helmet of Rams linebacker Leonard Floyd, according to the Cincinnati Enquirer.

“I think in some instances teams defending each other,” McVay said, according to the Los Angeles Times. “Fortunately, my understanding is nobody got hurt and we’ll move on from it. Not going to make a bigger deal than what it is. Not going to look at pointing fingers.”

Teams, and not the NFL, are responsible for any disciplinary actions resulting from practices or joint practices.

The Bengals host the Rams in Saturday’s preseason finale.