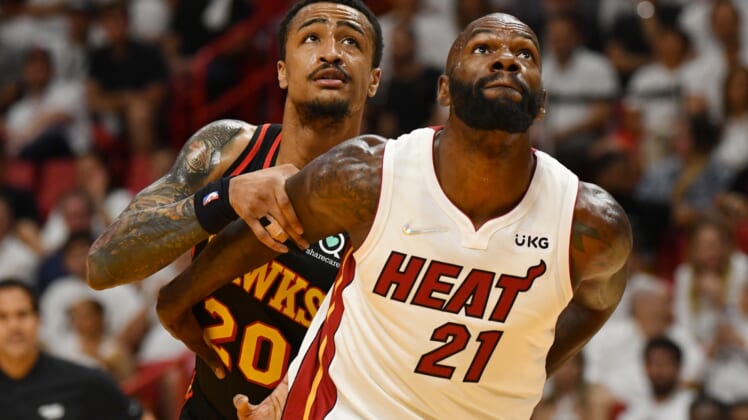 After a dominant Game 1 performance, the Eastern Conference’s top-seeded Miami Heat will look to maintain their home-court advantage and take a 2-0 lead Tuesday in their first-round playoff series against the visiting Atlanta Hawks.

Miami is being well-supported as a 7.5-point favorite at several sportsbooks. That includes the Heat drawing 69 percent of the spread bets and 80 percent of the handle at BetMGM and 68 and 83 percent, respectively, at DraftKings as of Tuesday afternoon.

Atlanta earned its way into the playoffs despite finishing the regular season ninth in the East, winning play-in games against Charlotte and Cleveland. The Hawks could not parlay that momentum into a Game 1 upset, however, with the Heat winning a never-in-doubt 115-91 decision on Sunday.

Miami led almost the entire way and grew its advantage to as many as 32 points behind a game-high 27 points from Duncan Robinson, who hit 8 of 9 attempts from 3-point range off the bench.

“The beautiful thing about this time of year, you just got to lock in on what’s in front of you, everything that ‘was’ is in the past,” Robinson said in his postgame press conference following Sunday’s rout. “Whatever I can do to help us win is what I’m all in for, and whatever that looks like, I’m willing to buy into it and I am buying into it.”

Lowry also contributed to a stifling defensive effort on Trae Young, who finished just 1 of 12 from the floor and 0 of 7 from beyond the 3-point arc en route to eight points. It marked just the second time in the 2021-22 season an opponent held Young to single-digit scoring, and it was his first single-digit-scoring game in 17 career playoff appearances.

Lowry said after the game that the key to Miami maintaining its edge in the best-of-seven series will be its adjustment once Young, who averages 28.4 points per game, starts making shots.

Young scored 102 combined points in four regular-season games against Miami, including 35 in the 113-109 Heat win on April 8.

“You don’t win one and win it all. If that was the case we’d have been in the Finals last year,” Young said, referring to the Hawks’ Game 1 win over Milwaukee in last season’s Eastern Conference finals. “We’ve just got to keep a clear mind, stay level-headed, and we will.”

Getting back into the series means solving one of the toughest defenses the NBA has to offer.

The Heat finished the regular season with the NBA’s fourth-best scoring defense at 105.6 points allowed per game.

“They played with way more intensity than we did, and we were not ready,” Atlanta’s Danilo Gallinari said. “They did it from the beginning of the game and we never matched it.”

Gallinari led the Hawks with 17 points in the loss. Gallinari and De’Andre Hunter, who finished with 14 points, were the only Atlanta starters to score in double figures. Kevin Knox and John Collins each produced 10 points off the bench.

The Over/Under market at BetMGM opened at 217.5 but shifted to 219.5 by Tuesday with nearly split action across the board. The 219.0 point total at DraftKings has seen 70 percent of the bets and 53 percent of the handle back the Over.