Heat’s Adebayo and Dragic eager to return to action 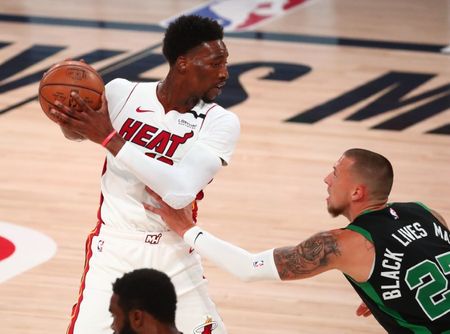 (Reuters) – Miami Heat players Bam Adebayo and Goran Dragic on Monday said they were itching to return to action after being sidelined with injuries as their team looks to battle back from a 2-1 deficit in the NBA Finals.

Adebayo suffered a neck muscle strain and Dragic tore his left plantar fascia in Game One of the best-of-seven series against the favored Los Angeles Lakers and it is unclear when they will be cleared to return.

“I’m getting better,” said Adebayo, who has averaged 17.8 points and 10.9 rebounds per game in the playoffs.

“I’m trying to get back as quickly as possible,” he said, adding that the medical staff are “trying to make sure I’m safe and I’m ready to play. It’s really day-to-day. When they say I’m ready to play, I’ll be out there.

“But yeah, this sucks sitting on the sideline.”

Dragic, who is averaging 19.9 points per game in the playoffs, said he was improving but remained in a lot of pain.

“I want to be out there with my team. That’s no secret. That’s what I was working my whole career for 12 years in the NBA,” he said.

“It’s not the easiest thing right now for me to sit down on the sideline and watch my team, how they are battling, how they are playing well, and of course I want to be out there. “

He added: “I ask the guy above us why it has to happen right now. It’s tough. It’s tough.

“You know, try to look at it this way – everything is with a purpose, so we’ll see.”

After losing the first two games by double digits, the Heat won on Sunday thanks to Jimmy Butler’s 40-point triple double.

Miami will look to even up the series in Game Four on Tuesday.