Heat pull away for series-opening win against 76ers 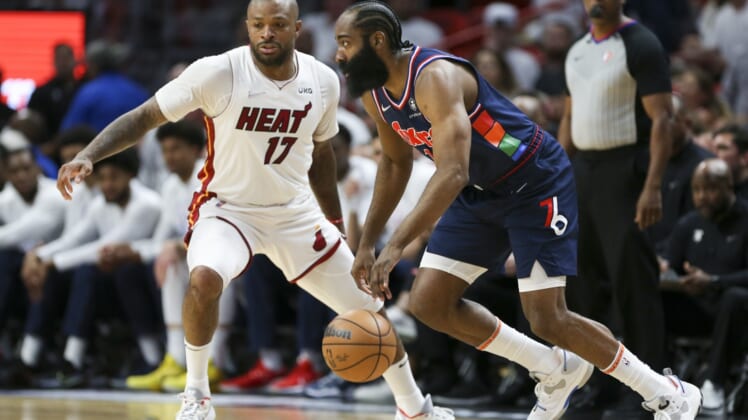 The 76ers played without Most Valuable Player candidate Joel Embiid, who is in the concussion protocol and also is dealing with an orbital fracture and a torn ligament in his right thumb.

Game 2 of the best-of-seven series will be played Wednesday in Miami.

The Heat led before 14 points in the first quarter and by 13 in the second before the 76ers rallied. Consecutive layups from Maxey and Harden gave Philadelphia a 51-50 advantage and that wound up being the score at halftime.

Herro and Adebayo each had 12 first-half points for the Heat, who managed only two points in the final 4:39 of the second period.

Harris paced the Sixers with 14 before the break, and Harden had 12.

Harris ended the run with a trey from the wing and added a short jumper to close the gap to 70-66.

Miami’s Victor Oladipo opened the fourth with a difficult runner in the lane.

After Philadelphia’s Paul Reed missed from point-blank range, Herro dropped in a 31-foot 3-pointer for an 85-72 advantage.

The Heat cruised to the victory in the final minutes as both teams emptied their benches.