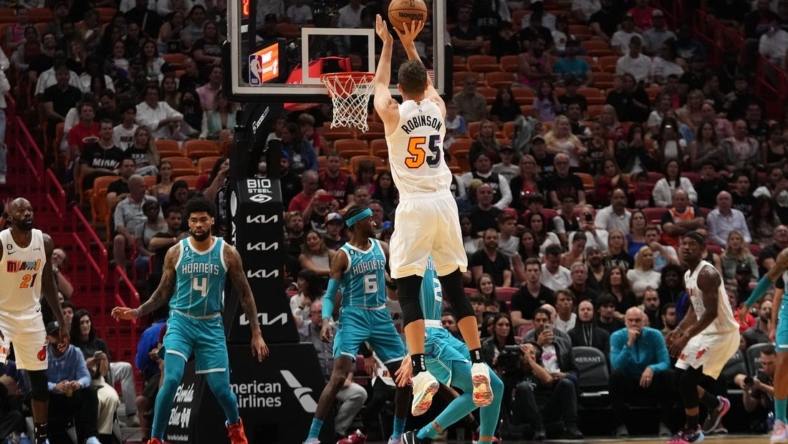 Max Strus poured in 31 points and the host Miami Heat had far too much offensive firepower for the Charlotte Hornets to deal with in a 132-115 victory Saturday night.

Bam Adebayo had 24 points, and Jimmy Butler and reserve Gabe Vincent both posted 20 points as the Heat won their second game in a row after a two-game skid.

The Hornets had good news with the season debut of standout guard LaMelo Ball, who had missed the first 13 games with an injury. Despite his 15 points, Charlotte dropped its eighth game in a row.

Terry Rozier’s 22 points and Kelly Oubre Jr.’s 20 points paced the Hornets, who also received 15 points from Nick Richards. Ball contributed six rebounds and six assists in his 28 minutes of action while shooting 6-for-17 from the field — just 1-for-9 on 3-pointers.

It was the second meeting in three nights in the same arena after the Heat beat the Hornets 117-112 in overtime in the first matchup.

The Heat pulled away in this one, overcoming a halftime deficit by compiling a 45-25 scoring edge in the third quarter. Miami scored 22 points in the first 4 1/2 minutes of the second half and shortly after that stretched its margin to 84-69 on a Strus basket.

Miami ended up making 16 shots from 3-point range, while the Hornets were 9-for-31 from long range.

Kyle Lowry supplied 12 points and 11 rebounds for the Heat.

The teams played an entertaining first quarter that ended with Miami up 34-33 as each team connected on five 3-points shots.

The Hornets went ahead 59-57 at halftime, shooting 53.5 percent from the field.