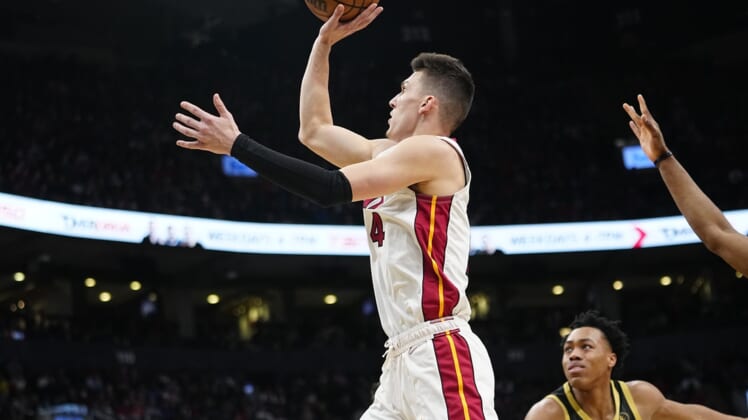 The Miami Heat can clinch the No. 1 seed in the Eastern Conference on Friday night when they host the Atlanta Hawks.

Miami (52-28) enters its 2021-22 regular-season home finale fresh off its highest-scoring performance of the season in a 144-115 rout of the Charlotte Hornets on Tuesday.

Highlighting the blowout win — the Heat’s fifth straight victory — was Tyler Herro scoring a career-high 35 points off the bench.

Herro paced four Miami scorers who had at least 21 points, a quartet that also comprised Jimmy Butler with 27, Bam Adebayo with 22 and Duncan Robinson with 21 off the bench (all on 3-pointers).

“Not every night is going to be like this,” Robinson said in the postgame press conference. “But obviously we are capable, as well. We’ve got a lot of guys [who] can score it, and especially when we’re playing unselfish like that, five people in spots where they can be successful. We can be pretty tough to guard.”

While the Heat have made their mark defensively – they rank third in the NBA in scoring defense at 105.3 points per game – sharing the ball and effective outside shooting also have been central to their push toward becoming the East’s top seed.

Right behind Miami in team 3-point shooting is Atlanta, which ranks second for the season at 37.4 percent.

The victory was Atlanta’s sixth in its past seven games as the team clinched both a berth in the Eastern Conference play-in round and a final regular-season record over .500.

Trae Young scored 30 points against the Wizards, Danilo Gallinari added 26, and Bogdan Bogdanovic scored his 18 points off 6-of-9 shooting from 3-point range as a reserve.

“Whenever we’re able to make threes and get stops, it give us a real chance to win,” Clint Capela told the Hawks’ website in his postgame interview.

In each of its past six wins, Atlanta has 118 points or more – better than four more than its season average of 113.8, which ranks sixth in the league.

The Hawks averaged 106.3 points in the three prior meetings with the Heat this season, going 1-2. All three games were played between Jan. 12 and Jan. 21.

Friday’s meeting in Miami also could be the first in a cluster of several in a row, as the two teams could meet in the first round of the playoffs. Atlanta enters the game tied with Brooklyn for the No. 8 spot in the East ahead of the play-in round.

Both the Hawks and Nets trail Cleveland for the No. 7 seed by one game heading into the regular season’s final weekend.