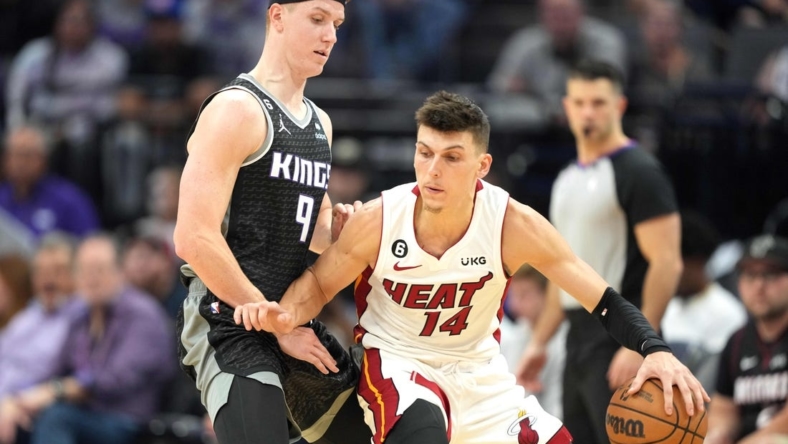 The Sacramento Kings will be without star point guard De’Aaron Fox.

The Miami Heat may be without star combo guard Tyler Herro.

The health of those two players will play a key role in the Wednesday game between the host Heat and the suddenly hot Kings, who have won two straight following a four-game skid.

Herro, who entered Miami’s Tuesday game averaging 19.9 points, got poked in the left eye in the second quarter of the contest against the visiting Golden State Warriors.

He sustained a contusion and did not return, finishing with two points in 10 minutes. The Heat went on to beat the defending NBA champions 116-109.

Following the game, Herro said he briefly lost his vision. However, he said he had it back by the end of the contest.

Fox banged knees with Charlotte Hornets center Nick Richards on Monday night. On Tuesday, an MRI revealed it was just a bone bruise for Fox — no structural damage — but he will sit out on Wednesday.

The fifth overall pick in the 2017 NBA Draft, Fox has averaged at least 21 points per game in each of the past three seasons and is putting up 24.5 per contest to begin the current campaign.

Fox likely will be replaced in the starting lineup by second-year guard Davion Mitchell, who filled in when Fox exited on Monday and scored 23 points to help Sacramento earn a 115-108 win at Charlotte.

“He brings a leadership presence off the bench,” Kings coach Mike Brown said of Mitchell, who made 9 of 11 shots from the floor. “He brings an understanding of what his role is and embraces his role. He’s a guy that I know anytime we call his number he is going to be ready to play.”

Mitchell, who averaged 11.5 points as a rookie, is known more for his tenacious defense. That effort has been matched by his teammates the past two games.

“We are fighting,” Mitchell said of his squad’s modest two-game win streak. “We are a team that don’t quit. We try to play 48 minutes.”

The Kings started the season 0-4 before beating the visiting Heat 119-113 on Saturday in Sacramento.

“They just put it on us,” Heat wing Duncan Robinson said. “Now we get them in our building.”

Robinson scored 17 points on Tuesday. He and Max Strus — who had 24 points — were huge off the Heat bench.

Miami coach Erik Spoelstra seemed to be especially grateful for Strus, who shot 8-for-17 from the floor on Tuesday, including 4-for-10 from 3-point range.

“Max continues to step up and play different roles,” Spoelstra said. “He was rock solid with Tyler out.”

If Herro is unavailable on Wednesday, the Heat may need more from Jimmy Butler, Bam Adebayo and Kyle Lowry. Butler had 23 points, eight assists and six rebounds on Tuesday. Adebayo added 19 points, seven rebounds and six assists, and Lowry contributed 13 points and a team-high nine assists.

For the Kings, Kevin Huerter has been a pleasant surprise, averaging a career-high 18.3 points. He is also shooting a team-high 53.2 percent from 3-point range.