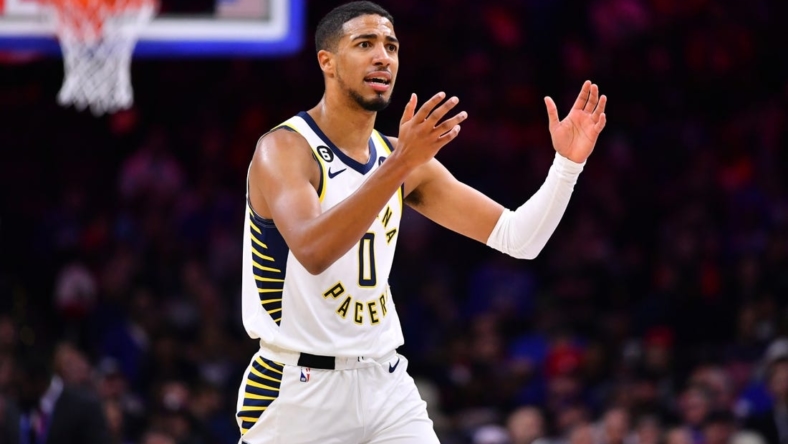 Watch out for Indiana’s Tyrese Haliburton.

That sentence is certainly top of mind for the Miami Heat, who visit the Indiana Pacers on Friday night.

A third-year pro, Haliburton averaged 13.0 points as a rookie and 15.3 last season. He has also improved each year with his assist totals, going from 5.3 as a rookie to 8.2 last season to his current and impressive pace.

Haliburton is also shooting 94.6 percent on free throws and 44.9 percent on 3-pointers.

Carlisle said other players around the NBA have remarked how quickly Haliburton plays.

Haliburton, 22, has formed a terrific backcourt with 20-year-old rookie Bennedict Mathurin, the eighth overall pick in this year’s draft.

Mathurin, who was born in Montreal and played his college ball at Arizona, is second on the Pacers in scoring (20.4). He is shooting 42.9 percent on 3-pointers and 86.4 percent on free throws.

The Pacers are also getting good production from veteran Buddy Hield, who is third on the team in scoring (17.8) and second in assists (4.1).

Even so, the Pacers are off to a slow start overall, losing five of their eight games. They have not escaped controversy, either, as power forward Myles Turner went on a podcast and said the Lakers should “take a hard look” at making a trade with the Pacers.

“I know what I can provide for a team,” said Turner, who is averaging 13.0 points and 7.0 rebounds in three games since recovering from an ankle injury.

The Heat, meanwhile, have no such internal controversy. The closest thing to controversy was Tyler Herro’s tiebreaking 3-pointer with 2.5 seconds left, which led Miami to a 110-107 win over the Sacramento Kings on Wednesday.

Brown did say, however, that Herro is a “great player,” and Heat coach Erik Spoelstra would not disagree with that point.

“That was a big-time shot,” Spoelstra said of Herro’s step-back, pump-fake 3-pointer. “My only criticism was that he left a couple of seconds on the clock.”

That didn’t matter, though, as the Kings failed to score on their final possession, giving the Heat consecutive wins for the first time this season.

The Heat won on Wednesday without their leading scorer, Jimmy Butler (21.5), who sat out due to a sore left hip. He is expected to return to action against Indiana, but no official announcement has been made.

Herro, who was poked in his left eye in a win over Golden State on Tuesday, is obviously seeing just fine. Against the Kings, he made 12 of 21 shots from the floor and added 12 rebounds for just his second career double-double.

For the season, Herro is averaging 18.6 points, 6.6 rebounds and 2.3 assists. His rebounds are on pace to be a career high, and the same can be said for his 47.8 percent shooting percentage.

A fourth-year pro, Herro is still just 22 years old, which means Heat coaches believe there is significant upside left in his game.