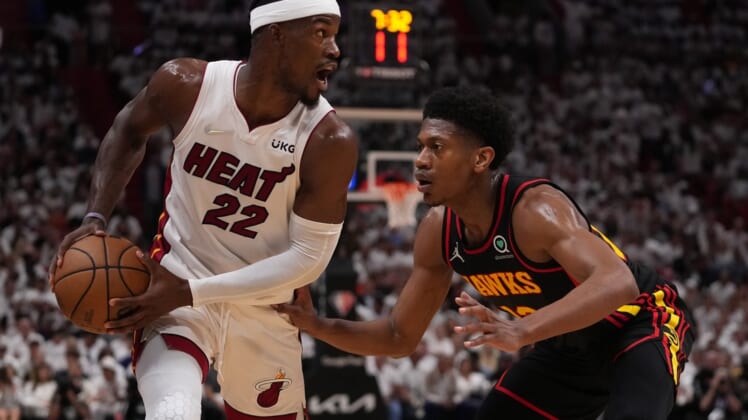 The Atlanta Hawks finished the regular season and play-in tournament with wins in 20 of their last 23 home games.

That success in Atlanta is part of what the eighth-seeded Hawks will rely on as they get set to host the top-seeded Miami Heat on Friday night in their first-round Eastern Conference playoff series.

Miami, with a pair of home wins, leads the best-of-seven series 2-0.

Now, it’s Atlanta’s turn to defend home court and since Jan. 17, no team has been better in its house than the Hawks.

NBA teams that take 2-0 leads eventually win that series 92.9 percent of the time. The Hawks, in fact, have never rallied from an 0-2 deficit, losing in all 26 of those cases.

The Heat are 1.5-point favorites in Game 3 at several sportsbooks. The line opened at 2.5 at BetMGM but had shifted by Friday morning with 78 percent of the spread bets and 79 percent of the handle backing Miami.

The Heat are also drawing strong support at DraftKings at 79 and 80 percent, respectively. Miami’s -120 moneyline has also been backed by 72 percent of the bets and 76 percent of the handle.

The Hawks have not found a way to stop Heat forward Jimmy Butler, who is averaging 33.0 points, 5.5 rebounds and 4.5 assists in the series. His scoring average is up significantly from his 21.4 mark in the regular season.

“Big-time basketball from one of the best two-way players in the game,” Heat point guard Kyle Lowry said of Butler.

Trae Young, Atlanta’s big-time player, has been held to 16.5 points and 5.5 assists. For the regular season, Young averaged 28.4 percent and 9.7 assists.

Young, who had a career-worst 10 turnovers in Tuesday’s 115-105 loss to Miami, seemed to blame the officiating. He was called for a technical foul during his brutal third period, when he was charged with five turnovers and didn’t get to the foul line.

“If the refs are going to let (the Heat) be as physical as they are and not call fouls, it’s going to be hard to do anything,” Young said.

Hawks coach Nate McMillan said his team’s goal on Friday is to take much better care of the ball.

“You can’t have 19 turnovers and expect to win a playoff game,” he said. “(Miami) scored 21 points off our turnovers, and a lot of that was in transition.”

Atlanta, which is 1-1 at home against Miami this season, may adjust its starting lineup again on Friday.

So far, Young, De’Andre Hunter, Kevin Huerter and Danilo Gallinari have started both of Atlanta’s playoff games. For the fifth spot, McMillan started Onyeka Okongwu in Game 1 and John Collins in Game 2.

Collins responded with a double-double — 13 points and a game-high 10 rebounds — in his start. McMillan, in Game 2, also switched the 6-foot-7 Huerter onto guarding the smaller Lowry, who is 6-0.

Miami, which has won eight of its past nine games dating to the end of the regular season, has started the same five in both games in this series: Butler, Lowry, Bam Adebayo, P.J. Tucker and Max Strus.

In other words, there’s no reason for the Heat to change when this Butler-led team is playing so well.

“I always want to play basketball the right way,” Butler said. “Whatever it takes to win — that’s why they brought me here.”

The Over/Under opened at 220.5 at BetMGM but has also seen movement. It was 221.5 on Friday morning with 56 percent of the bets backing the Over while the Under had drawn 53 percent of the handle.

The Over had been more popular at DraftKings (221.5), where it had been supported by 57 and 59 percent, respectively.