Heat favored at home in critical Game 5 vs. 76ers 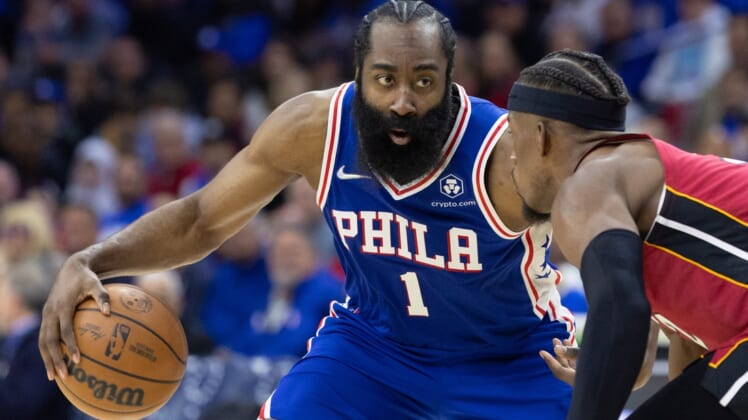 Lost in the mania about Joel Embiid’s dramatic, successful return in consecutive wins over the Miami Heat is that the Philadelphia 76ers have a former Most Valuable Player who played like it Sunday night.

After going scoreless and picking up two first quarter fouls, James Harden reminded everyone why he’s just four years removed from an MVP. He finished with 31 points, including 16 in the fourth quarter, of a 116-108 victory in Game 4. He added nine assists and seven rebounds.

Harden, Embiid and Philadelphia will try to take a 3-2 lead on Tuesday night in Miami when the Eastern Conference semifinal series resumes.

Prior to Sunday night, Harden hadn’t scored more than 22 points in any of the 76ers’ nine playoff games. It certainly didn’t look like he would go on a tear when he joined teammate Tobias Harris in early foul trouble. But Harden delivered the kind of performance over the final three quarters one would expect from a former MVP.

His fourth quarter explosion included his trademark stepback 3-pointer from the top of the key that gave Philadelphia an insurmountable 114-103 lead with 1:07 remaining.

“We’re getting more confident as the series goes on,” Harden said. “Those first two games (were) a blur. But obviously, having Joel and having our full team, we kind of know what to expect. We know where to execute on both sides of the ball.

“It just makes the job a lot easier. Think about: We’re still a fairly new team. We’re damn near two months. So, when we finally catch a rhythm and finally find something that works, Joel goes off for a couple of games. So, we’re finally settling into the series.”

Not only Harden, but this year’s MVP finalist and league scoring champion, too.

Embiid contributed 24 points and 11 rebounds in his second game back from a fractured orbital bone and concussion. All five starters finished in double figures as the 76ers drained 16 of 33 3-pointers.

Meanwhile, the Heat are looking for the scoring balance that marked their two double-figure home wins in Miami. Jimmy Butler tried his best to carry the team with 33 and 40 points in the losses in Philadelphia but got precious little help.

Bam Adebayo was a non-entity in Game 3, although he did chip in 21 points on Sunday night. Tyler Herro helped some off the bench but wasn’t efficient. And Kyle Lowry’s left hamstring issue has flared up again, with the Heat ruling him out for Game 5 after he struggled (six points on 3-of-14 shooting) in Games 3 and 4.

There’s also the matter of Miami going cold from distance. In light of the 76ers’ work from 3-point range Sunday night, the Heat’s 7-of-35 marksmanship from the arc looks even worse.

“I thought we had some really good looks. We just missed them,” coach Erik Spoelstra said.

Miami has something else to worry about. Reserve center Dewayne Dedmon sat out Game 4 with an illness and his status for Game 5 isn’t known. Dedmon’s presence would at least give the team six more fouls to use against Embiid.