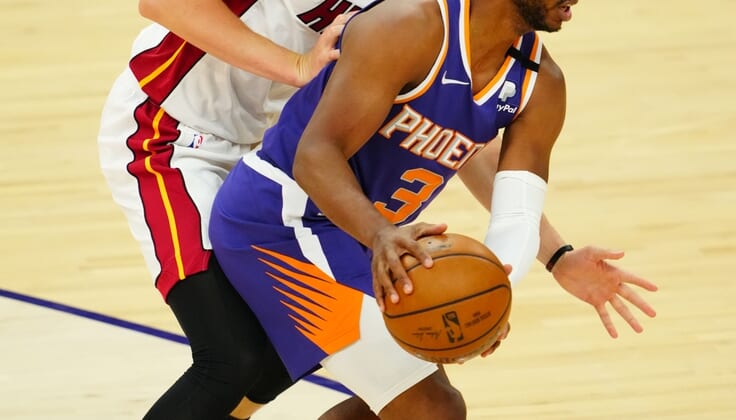 The Miami Heat, 2-2 in what is scheduled to be a six-game road trip, will face their stiffest test yet on Saturday when they visit the Phoenix Suns.

The Suns are 25-0 when leading after three quarters, and Paul — as their veteran point guard — deserves credit for closing out opponents.

“Some teams don’t know what to run or who to go to down the stretch,” Paul said. “We know what our go-to plays are.”

A lot of those plays go to shooting guard Devin Booker, who ranks 13th in the NBA in scoring (23.5), giving Phoenix perhaps the best backcourt in the NBA. Booker is shooting 40.5 percent on 3-point attempts.

Those 13 rebounds set Paul’s career high, and he had five assists and a crucial 3-pointer in Thursday’s fourth quarter.

Despite his advanced age — in NBA terms at least — Paul is one of just three Suns player to compete in all 38 of Phoenix’s games this season, joining Mikal Bridges and Cameron Johnson.

Bridges is averaging 12.2 points and shooting 39.7 percent on 3-point tries. Johnson, a reserve, is averaging 11.9 points and has emerged as one of the best long-distance shooters in the NBA (44.4 percent from 3-point range, ranking fourth in the NBA). He scored a career-high 24 against the Clippers.

The Suns could also get Deandre Ayton, Jae Crowder and JaVale McGee back on Saturday. They are already off the COVID-19 list, but now it’s about their conditioning. Those three players have combined to average 36.8 points this season. Ayton leads the team in rebounding (11.1) and ranks second in scoring (17.0).

Meanwhile, Miami lists 12 players on its injury/illness report. The most significant players on that list are All-Stars Jimmy Butler (ankle, questionable) and Bam Adebayo (thumb, out several weeks).

Even so, the Heat still had enough to beat the Portland Trail Blazers, 115-109, on Wednesday night.

Heat guard Max Strus, who missed four games under COVID-19 protocol, scored 25 points, grabbed six rebounds and dished five assists against Portland. That was his first game back from COVID protocol, yet he managed to play 31 minutes, shooting 7-for-13 on 3-pointers.

“The shooting I wasn’t worried about,” Strus said. “But after being off for seven or eight days, I was concerned about the pace of play and getting up to speed.”

Miami also got Duncan Robinson off the COVID list in time for the Portland game, and he delivered 12 points on 4-for-6 long-range shooting in 17 minutes off the bench.

“You just get a sense our guys are getting healthier,” Heat coach Erik Spoelstra said.

Assuming Butler is out, Spoelstra will rely on Tyler Herro and Kyle Lowry as his go-to players.

Herro is averaging 20.3 points in 33 games, including 23 off the bench. He is considered one of the best reserves in the league.

Lowry averages 13.7 points and ranks fifth in the league in assists (8.3 per game).

Beyond that, Miami has gotten excellent contributions from role players such as Strus, Robinson, Omer Yurtseven, Caleb Martin, P.J. Tucker and Kyle Guy.