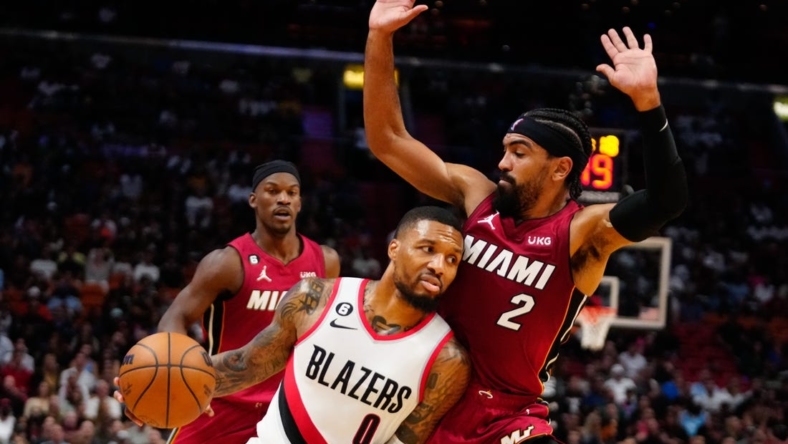 Josh Hart swished a left-corner 3-pointer at the buzzer as the visiting Portland Trail Blazers defeated the Miami Heat 110-107 on Monday night.

Miami’s Max Strus had tied the score at 107 with a contested 3-pointer with 6.2 seconds left. But the Blazers raced down court, and Damian Lillard passed the ball to Hart for the game-winner.

Heat forward Jimmy Butler, returning from a two-game absence, produced 16 points, seven assists, six steals and four rebounds. He had been out due to a sore left hip.

The Heat, who were opening a four-game homestand, had seven players in double-figure scoring. Bam Adebayo tied Hart and Butler for scoring honors with 16 points, and Kyle Lowry added eight assists.

However, Miami’s Tyler Herro, who has a sprained left ankle, missed his first game of the season. He is Miami’s second-leading scorer at 19.6 points per game.

Lillard and Simons both returned from injuries. Lillard, who was averaging 31 points before missing four straight games due to a strained right calf.

Simons was averaging 22 points before missing two straight games due to a foot injury.

Ex-Heat forward Justise Winslow scored 12 points on 6-for-8 shooting off the bench.

Grant scored 10 points in a first quarter that finished tied at 28. Both teams shot 45 percent from the floor.

Miami took a 60-53 lead at halftime as Duncan Robinson scored nine points on 3-for-5 shooting, all from long range, in the second quarter.

The Heat stretched their lead to 81-73 at the end of the third quarter. Miami’s Caleb Martin led all scorers in the period with eight points.

After Adebayo got called for an offensive foul, Simons made two free throws with 8.5 seconds left, giving Portland a 107-104 lead.