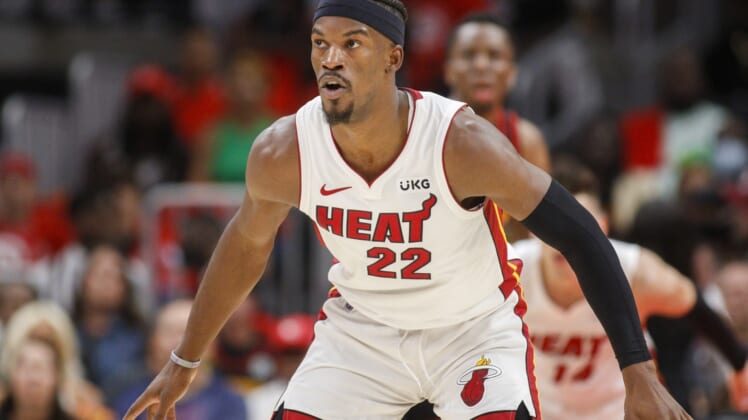 The Miami Heat hit Tuesday with one goal: Find a way to win another game against the Atlanta Hawks.

It doesn’t matter so much what personnel is available to do so.

The Heat have shown that there’s versatility, and flexibility, with their lineup and can use all available combinations in a potential series-clinching Game 5 on Tuesday night against the visiting Hawks.

“We have some gnarly competitors in our locker room that love big challenges,” Heat coach Erik Spoelstra said.

The Heat went without point guard Kyle Lowry in Game 4, but that didn’t seem to limit Miami. Spoelstra calls Lowry, who had a hamstring strain, the quarterback, but there are other players capable of adjusting their roles.

Miami strengthened its grip on the series with Sunday’s 110-86 decision in Atlanta, taking a 3-1 series lead.

The Heat are 6.5-7.5-point favorites in Game 5 at most sportsbooks. Miami has been backed by 61 percent of the spread bets and 84 percent of the handle at DraftKings. They have also been heavily supported (71 and 80 percent, respectively) at BetMGM, where the line opened at 6.5 but shifted to 7.5 by Tuesday.

The Heat clearly have stood out as the better team, with three double-figure victories aside from the one-point loss in Game 3, in this first-round series. But Spoelstra has warned his team one loss is all it takes to throw momentum out the window.

Miami’s Jimmy Butler is determined to play closer. He poured in 36 points in Sunday’s game.

“I’m not the only one in a rhythm,” Butler said. “The guys are going to pick it up for us. Everybody is playing their best basketball at the right time.”

Trae Young, one of the NBA’s top scorers, was limited to nine points in Game 4. He had just eight points in the first game of the series at Miami.

It’s clear that the Hawks don’t hold much of a chance if Young isn’t clicking offensively.

“We’ve got to do a better job of figuring out how to get open looks so I can create for my teammates and myself,” Young said.

Multiple defenders have been used by Miami to distract Young.

“He has got so many bodies being thrown at him,” Butler said. “You constantly have to have your head on a swivel if you’re him.”

Spoelstra said the ability to be creative defensively is one of the bonuses for the Heat, particularly while dealing with Young and his Atlanta teammates. Among the goals is keeping the Hawks off the free-throw line.

“A lot of it was our defensive toughness and versatility and making it tough, which is not easy against this team,” Spoelstra said. “They have so many guys who can shoot the 3 and take it off the dribble.”

The Hawks have had shifting player rotations as well. Center Clint Capela was in the starting lineup after missing the first three games of the series because of a knee injury. He had two points and seven rebounds.

As much as guard play has been emphasized in the series, the Hawks haven’t received much in the post. They managed just 26 points in the paint in Game 4. Forward John Collins is still working his way back from an injury and his 11 points weren’t enough to make a difference Sunday.