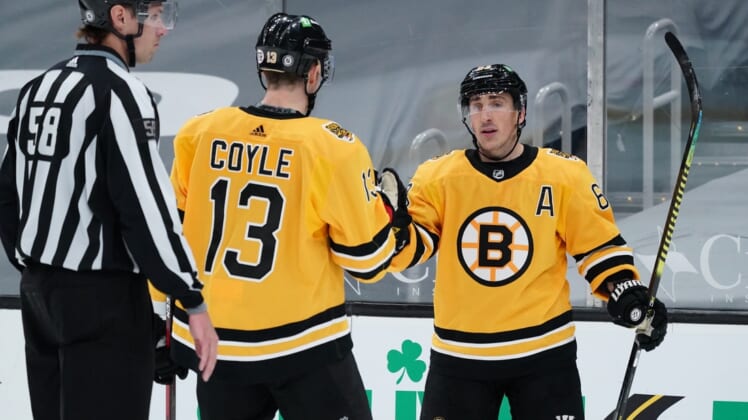 The Pittsburgh Penguins could continue to get players back from injury Tuesday when they start a two-game set with the New York Rangers in Madison Square Garden.

No. 1 goaltender Tristan Jarry and third-line center Teddy Blueger were full-go participants Monday at Penguins practice and might return to the lineup Tuesday.

One setback is that winger Brandon Tanev is now out week to week because of an unspecified injury.

Casey DeSmith has been stellar as the backup goalie, but he had a rare off game Saturday in Pittsburgh’s 7-5 loss at Boston. If Blueger plays Tuesday, the Penguins would stand to have six of their top nine forwards in the lineup; second-liners Evgeni Malkin and Kasperi Kapanen remain out.

The loss in Boston came after a five-game winning streak and a stretch of 12-2-1 that put the Penguins in contention for the East title.

Pittsburgh Penguins coach Mike Sullivan wasn’t overly critical of his players after Saturday’s loss, which ended a run of seven games in which they gave up only 10 goals. In fact, he understands how things can occasionally snowball in the wrong direction despite the best of intentions.

The Penguins had a big buy-in to two-way play, forwards included, before Saturday.

“We’ve just got to tighten it up defensively and just focus on the next couple games,” Pittsburgh defenseman Cody Ceci said.

The Rangers, meanwhile, are balancing a run for a playoff spot in the East with the development of a contingent of young players.

Coach David Quinn has made it clear that finishing in the top four in the division and qualifying for the postseason has to be the higher priority. That made Saturday’s come-from-ahead 3-2 shootout loss at Buffalo sting.

“At this point in time in the season, you need to win; you can’t get one point,” Quinn said. “Obviously, we all look at the scores within our division because it’s such a unique year, but we’ve just got to make sure that we correct some of the things we didn’t do well.”

In two straight games at Buffalo, the Rangers gave up a third-period lead, leading to overtime and a shootout. The Rangers prevailed in the first game, leaving them 6-3 in the nine games before Saturday’s shootout loss.

One memorable aspect Saturday was the debut of Russian rookie forward Vitali Kravtsov, which had been anticipated as part of the Rangers’ rebuild. He gives the team five of its first-round draft picks from the past four years, joining Filip Chytil, K’Andre Miller, Kaapo Kakko and Alexis Lafreniere. You can add to the youth movement 23-year-old defenseman Adam Fox, who has a 10-game point streak.

Pittsburgh can expect to see a Rangers third line that already had been called the “kid line” and the “diaper line” and now features Kravtsov, 21, Lafreniere, 19, and Chytil, 21.