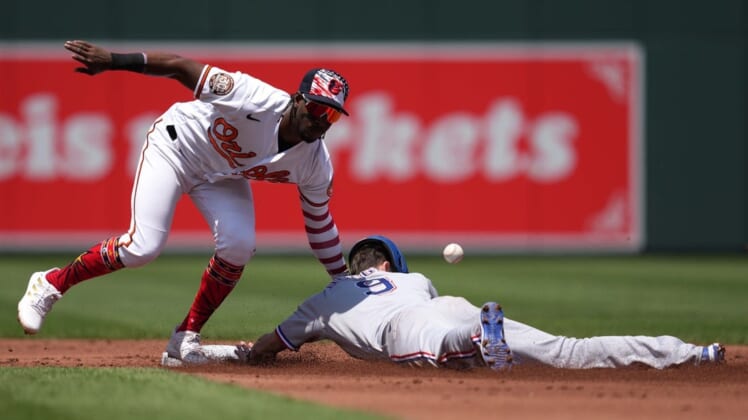 Jorge Mateo was hit by a pitch with the bases loaded in the bottom of the 10th inning to give the Baltimore Orioles a 7-6 victory against the visiting Texas Rangers on Monday afternoon.

The Orioles posted their final run without the ball leaving the infield, with an infield single and intentional walk coming before Matt Moore’s wayward pitch ended the game as ghost runner Austin Hays scored.

Mateo, who was hit in the back of the left knee, was helped to first base by teammates in order to complete the victory.

Marcus Semien led off the ninth inning with a home run to put Texas ahead 6-5. Adley Rutschman’s two-out double for the Orioles in the bottom of the inning knotted the score, knocking in pinch runner Ryan McKenna and forcing the extra frame.

Semien’s 10th home run of the season marked his third hit of the game. The blast came off Jorge Perez, who was the fifth of six Baltimore pitchers used in the opener of the three-game series.

Cedric Mullins homered and doubled in a run for the Orioles, who returned home following a 5-5 road trip. Rougned Odor had three hits for Baltimore, which has won two straight following a four-game skid.

Joe Barlow pitched the ninth and failed to secure a save for the Rangers. Moore (3-1) took the loss after not retiring a batter.

Baltimore’s Bryan Baker (3-3) pitched the 10th for the victory. Lopez appeared in his third game in four days and has allowed at least a run in each of those.

Orioles starter Dean Kremer made it through four innings unscathed. But he was touched for five runs and eight hits in 4 2/3 innings as Baltimore’s 2-0 lead vanished.

The 5-2 lead didn’t last long. Mullins homered in the fifth and the Orioles pulled even in the sixth when first baseman Lowe’s error with one out allowed two runs to score.

Baltimore began the scoring in the second inning on Jonathan Arauz’s run-scoring single. The Orioles pushed the edge to 2-0 when Mullins had an RBI double in the third inning.