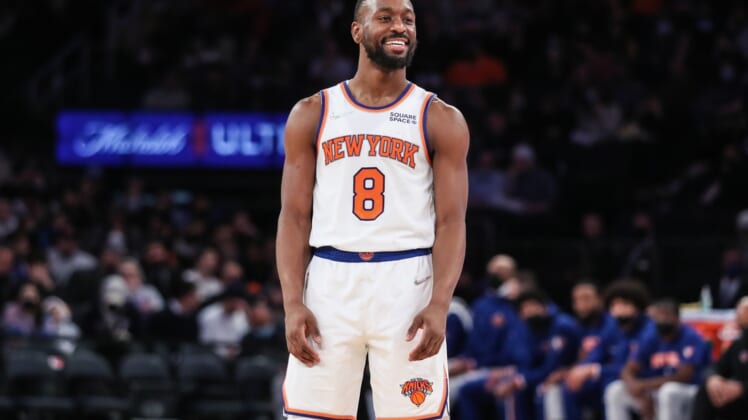 The New York Knicks might have discovered a most unexpected holiday gift in the resurgent Kemba Walker.

But it’d be easier for the Knicks to enjoy the return to form of the former All-Star point guard if their defensive identity wasn’t somewhere in the lost and found.

The Knicks will look to begin regaining their defensive prowess Saturday afternoon, when they host the Atlanta Hawks in a Christmas Day matinee.

Both teams were off Friday after playing on the East Coast on Thursday night, when Walker’s 44 points went for naught as the host Knicks fell to the Washington Wizards 124-117 and the visiting Hawks overcame a spate of absences to edge the Philadelphia 76ers, 98-96.

Walker scored 36 points in the middle two quarters Thursday on his way to finishing with his most points in a game since Dec. 11, 2019, when he also scored 44 points for the Boston Celtics against the Indiana Pacers.

The dramatic return from Tom Thibodeau’s doghouse — Walker was a healthy scratch for nine straight games before returning to the lineup Dec. 18, when the Knicks were missing six players due to injuries and COVID-19 protocols — might have become a Jeremy Lin-esque tale Thursday if not for New York’s defensive breakdowns against the Wizards, who shot 63.6 percent from the field in the second half, including 56.3 percent (9 of 16) from 3-point land.

“He played a monster game but we came out with a loss, so it’s a shame to waste that type of effort with a game like that,” Thibodeau said. “When you’re short-handed like we are right now, we can’t afford not to play with great intensity on every possession. So that’s where we are.”

Both the Knicks and Hawks are enduring short-handed stretches in the midst of COVID-19 outbreaks. New York played Thursday without Kevin Knox, Miles McBride, Nerlens Noel and Immanuel Quickley, all of whom were in health and safety protocols, as well as RJ Barrett and Quentin Grimes, who were activated from the COVID-19 list but were still building their conditioning. Point guard Derrick Rose is also out indefinitely after undergoing ankle surgery Wednesday.

The Hawks had seven players on the COVID-19 list Thursday, including star point guard Trae Young as well as point guard Sharife Cooper, who tested positive for the coronavirus earlier in the day.

But Atlanta, with a lineup featuring just one regular starter in John Collins and four other players who entered Thursday with a combined 70 NBA starts, raced out to a 19-point lead before overcoming a late deficit in the fourth quarter, when Bogdan Bogdanovic scored the Hawks’ final 10 points, including the go-ahead jumper with 2:51 left.

Quickley is out of protocols for the Knicks and should be eligible to play Saturday. Multiple outlets reported Friday that Young isn’t expected to be cleared for the game.

The Knicks are playing on Christmas Day for an NBA-high 54th time and the first time since 2018, when they fell to the Milwaukee Bucks, 109-95.

No other NBA team that has played on Christmas has gone longer between Dec. 25 appearances than the Hawks, who are playing on the holiday for the 20th time but the first time since 1989, when they beat the Cleveland Cavaliers, 115-104.