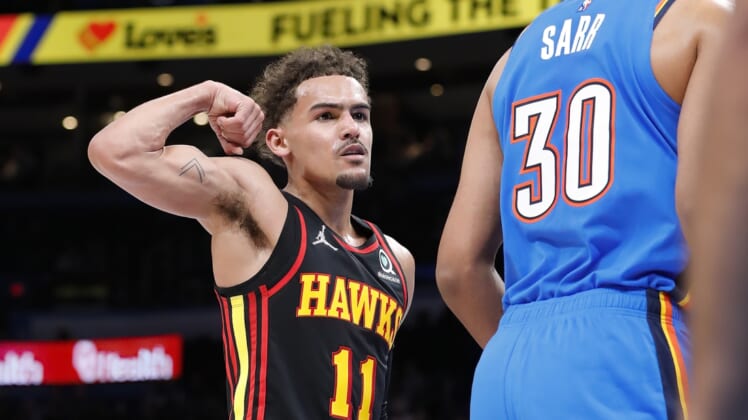 The Cleveland Cavaliers and the Hawks both have the playoffs on their minds ahead of their Thursday meeting in Atlanta.

The Cavaliers (42-34), currently the seventh-place team in the Eastern Conference, are trying to catch the Toronto Raptors and escape the play-in tournament.

Cleveland took a 120-112 loss to the visiting Dallas Mavericks on Wednesday to fall two games behind the Raptors, who beat the visiting Minnesota Timberwolves 125-102. The Cavaliers have lost four of their past five contests.

The Hawks, sitting in 10th place, have their eyes on catching the eighth-place Brooklyn Nets and the ninth-place Charlotte Hornets. Atlanta beat the host Oklahoma City Thunder 136-118 on Wednesday for its third straight win. The Hawks trail Charlotte by a half-game and Brooklyn by one game.

The Hawks lead the season series with the Cavaliers 2-1, having won the past two matchups, most recently 124-116 in Atlanta on Feb. 15 when Trae Young produced 41 points and nine assists.

Young was at it again on Wednesday, scoring 41 against Oklahoma City while his mother and father watched from courtside in his home state. It was his 10th 40-point performance of the season and his fourth over the past nine games.

Young scored 30 points in the first half to help Atlanta to an 85-58 lead at intermission, the most points the Hawks have scored in a first half in franchise history.

Atlanta had six players finish with double-figure point totals, including Kevin Huerter and Bogdan Bogdanovic with 20 each and seldom-used Kevin Knox II with 17, the most he has scored since joining the Hawks in January.

“That’s what we’ve been doing all season long,” Atlanta coach Nate McMillan said. “Guys have been in and out of the lineup and guys continue to get opportunities and they’re taking advantage of it. We needed (Knox) tonight with all our forwards being out, and he stepped up and played really well. Those were really good minutes.”

Cleveland’s Darius Garland made history on Wednesday when he scored 25 points, becoming the fourth Cavs player to score 3,000 career points before his 23rd birthday. The others were LeBron James, Kyrie Irving and Collin Sexton.

Garland scored 30 points against the Hawks in the last meeting. In 14 games in March, he is averaging 25.7 points and 10.9 assists.

Caris LeVert paced Cleveland with 32 points against the Mavericks, his highest total since arriving from the Indiana Pacers in a February trade.

“This is who Caris is,” Cleveland coach J.B. Bickerstaff said. “It was just a matter of time.”

The Cavaliers will be without rookie Evan Mobley in Atlanta. He missed the Wednesday game due to a sprained left ankle and likely will be sidelined for two more contests.

“It’s a test of character that our guys have passed time and time again,” Bickerstaff said. “Our guys don’t quit.”