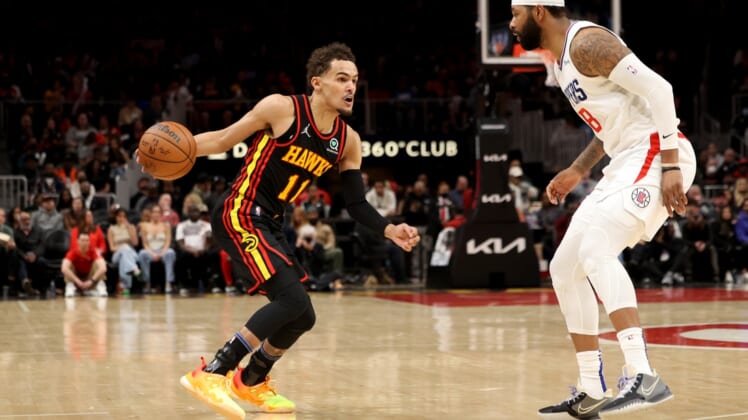 The Atlanta Hawks attempt to strengthen their playoff position and continue their hot play at home on Sunday when they host the Indiana Pacers.

Atlanta’s uneven season continued Friday when it knocked off the Los Angeles Clippers 112-106 to end a two-game losing streak.

The Hawks are 6-4 over their last 10 games and are tied with Charlotte for ninth place in the Eastern Conference. Atlanta, which has a three-game lead over 11th-place Washington, has won 12 of its last 14 games at home.

Indiana snapped a three-game losing streak on Saturday by beating the San Antonio Spurs 119-108 on the road. The Pacers have lost 12 of their last 16 games and are out of playoff contention.

The Hawks have won both previous meetings with Indiana this season, 114-111 on Dec. 1 in Indianapolis and 133-112 in Atlanta on Feb. 8, the day the Pacers unloaded their best players at the deadline and had only eight available for the game. The Hawks are shooting 54.5 percent from the floor and 50 percent on 3s against Indiana, the highest against any of their opponent this year.

Atlanta’s win over the Clippers came on the heels of disappointing losses to Detroit and Milwaukee. The Hawks were able to hang on late against Los Angeles, something they have struggled with of late.

Atlanta must continue to be patient while second-leading scorer John Collins works his way back from a foot injury that caused him to miss seven games. Collins played 23 minutes and scored nine points against the Clippers, but has struggled to regain his form.

“I really have a great deal of respect for what John is doing for us and what he’s trying to play through,” McMillan said.

The Hawks continue to rely on Trae Young, who averages 27.8 points and 9.4 assists. In two games against the Pacers this season, he’s averaging 33.5 points and 10.5 assists.

The Pacers had a chance to beat Cleveland on Tuesday, but came up short. Indiana had a two-point lead with 40 seconds left, but could not close it out. An ill-advised foul with 14 seconds left and a turnover proved too much to overcome.

“We have to make sure the guys know the situation,” Indiana coach Rick Carlisle said. “We told (Jalen Smith, who committed the foul), you can mourn it for 10 minutes and then you have to forget about it.”

Buddy Hield, one of the players who came over in the trade with Sacramento, has scored in double figures in each of the 12 games he’s played since joining Indiana. That includes three 20-plus point performances and a season-high 36 against Milwaukee.