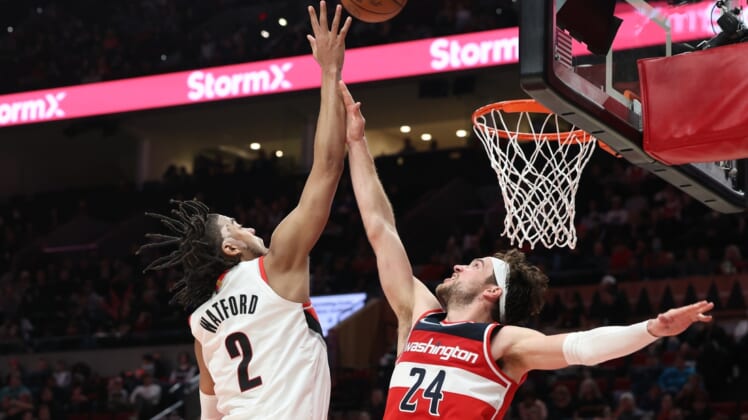 The Atlanta Hawks can get back to the .500 mark for the first time since Dec. 15 when they host the Portland Trail Blazers on Monday night.

The Hawks have won two straight and 13 of their last 15 games at home. A win would elevate their record to break-even, where they haven’t been since beating the Orlando Magic nearly three months ago to improve to 14-14.

“We know we’ve been here before,” Atlanta coach Nate McMillan said. “For us it’s about closing this homestand, and we’ve got to put these last two games behind us and come out with that same focus we had from the beginning. To get used to that level of play once again … we’re going to need to bring that from start to finish.”

Atlanta had a 19-point lead against Indiana on Sunday night but allowed 69 points in the second half and had to hang on to beat the short-handed Pacers 131-128. The win moved the Hawks into sole possession of ninth place in the Eastern Conference and put them 1 1/2 games behind No. 8 Brooklyn.

The Trail Blazers flew into Atlanta on Sunday morning after beating the Washington Wizards 127-118 on Saturday. The Blazers are starting a five-game trip against Atlanta. Josh Hart is coming off a career-high 44 points in the win that helped the team end a six-game losing streak. It was the team’s first victory since the All-Star break.

“I made some tweaks to my jump shot before the game, so I came into the game with a little more confidence,” Hart said. “I definitely wish I had gotten the 50. I don’t know when I’m going to have another night like this, so next time I’ll have to tell Trendon (Watford) to pass me the ball a little more.”

Portland won the first meeting 136-131 on Jan. 3 in Portland. That game saw Atlanta’s Trae Young score a career-high 56 points and Portland’s Anfernee Simons score 43. Young became the first player in NBA history to score 55-plus points and have 14-plus assists in the same game. Young was one point shy of tying the franchise record of 57 points, shared by Bob Pettit, Lou Hudson and Dominique Wilkins (twice).

Young is on another scoring binge. He scored 47 points Sunday, including 33 in the first half, a career best for a half. He made four free throws in the final 30 seconds to prevent the Hawks from blowing a lead.

“They went with a box-and-one,” Young said. “They were face-guarding and not letting me catch it. Everybody didn’t know what to do when we got in that position. We went over it before, but we’ve got to be better in those situations, and I think that’s what allowed them to get back in the game.”

The Trail Blazers will be without Simons this time around. He will miss the next two weeks with patellar tendinopathy in his left knee. Atlanta will likely be without second-leading scorer John Collins, who sat out Sunday’s game with right-foot soreness and a sprained right ring finger. McMillan said Collins would be a game-time decision.