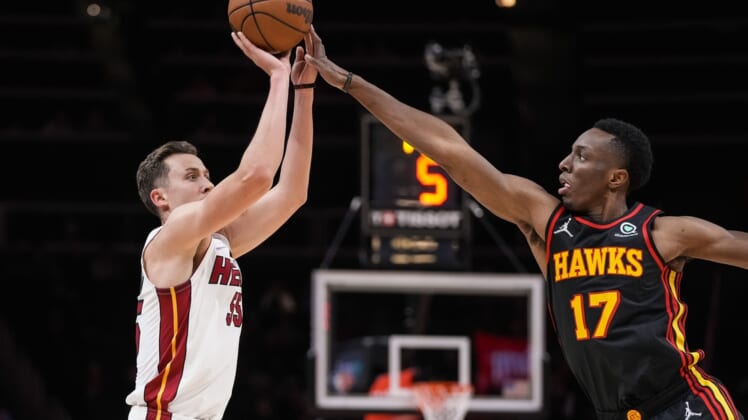 Trae Young scored 28 points and Kevin Huerter added 21 and the Atlanta Hawks hung on to beat the visiting Miami Heat 110-108 on Friday and extend their winning streak to three games.

Atlanta nearly blew an 18-point second half lead when the Heat made six 3s in the final quarter and pulled to within a point in the final minute.

Miami’s Jimmy Butler missed an open layup on a lob with 22.8 seconds left that would have given Miami the lead. After Young made one of two free throws with 10.7 seconds remaining, Butler missed a 3-pointer from the corner with 5.4 seconds left that would have won the game. Miami’s Max Strus grabbed the rebound but was falling away and his desperation follow-up shot wasn’t close.

Young had four 3-pointers and Huerter knocked down five from distance. John Collins had 15 points and seven rebounds and De’Andre Hunter added 13 points and 10 rebounds.

Miami was led by Bam Adebayo with 21 points, six rebounds and five assists and Duncan Robinson with 19, including five 3s. Buter had 13 points, eight rebounds and eight assists.

Miami has won two of three meetings with Atlanta.

After leading 31-30 at the end of the first quarter, the Hawks found their shooting touch and led by as many as 14 points. Atlanta shot 59.5 percent in the first half and got 16 points from Young to lead 60-51 at the break.

Miami was more intense on defense to open the second half and cut the lead to four points on a 3-pointer by Butler at 7:17. But the Hawks responded with an 11-2 run to re-establish a 13-point lead at 77-64. Atlanta took an 88-74 lead into the fourth quarter.

The Hawks play again on Sunday at Charlotte. Miami returns home to start a three-game homestand on Sunday against the Los Angeles Lakers.