Hawks climb over .500 with season sweep of Pacers 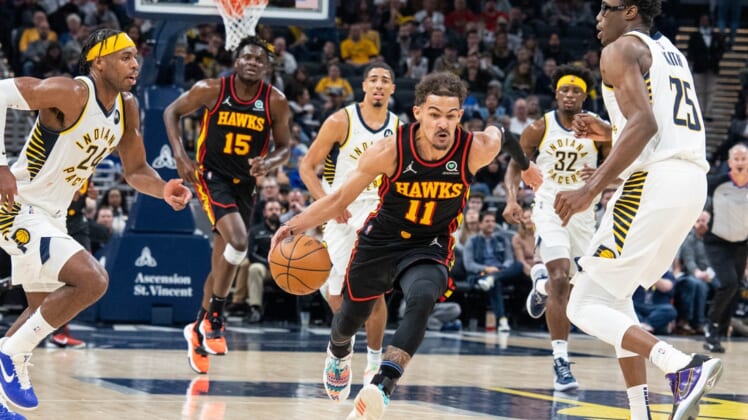 The Atlanta Hawks got 29 points from Bogdan Bogdanovic and double-doubles from Clint Capela and Trae Young to defeat the Indiana Pacers 132-123 on Monday in Indianapolis.

Bogdanovic, who sat out the previous game with knee soreness, came off the bench to hit five 3-pointers and lead the team in scoring for the eighth time. Capela had 22 points and 15 rebounds for his 31st double-double and Young scored 14 points with a season-high 16 assists for his 38th double-double.

Indiana was led by Buddy Hield with 26 points, with Tyrese Haliburton adding 25 points and 13 rebounds.

Young set the pace early with eight points and eight assists to give Atlanta a 44-30 lead after the first quarter. It was the most first-quarter points scored by the Hawks besting the previous high by four, also against Indiana on Feb. 8.

The Hawks twice led by 18 in the second quarter, but the Pacers cut the lead in half with 2:11 remaining. Atlanta lead 74-63 at halftime. Capela had 16 points and 10 rebounds at the half.

Indiana cut the lead to six points with 3:11 left in the third quarter, only to have Atlanta outscore the Pacers 8-2 and lead 102-90 going into the final quarter. The Pacers never got closer than nine points.

Indiana coach Rick Carlisle was back on the bench after missing the last two games with personal reasons.

Both teams were playing short-handed. The Hawks got Bogdan Bogdanovic back from right knee soreness, but were without Danilo Gallinari (right elbow contusion), De’Andre Hunter (right knee soreness) and John Collins (right foot strain). The Pacers got Goga Bitadze back from a sore right foot, but played without Oshae Brissett (sore back), Duane Washington Jr. (right hip bruise) and Malcolm Brogdon, who was being rested.