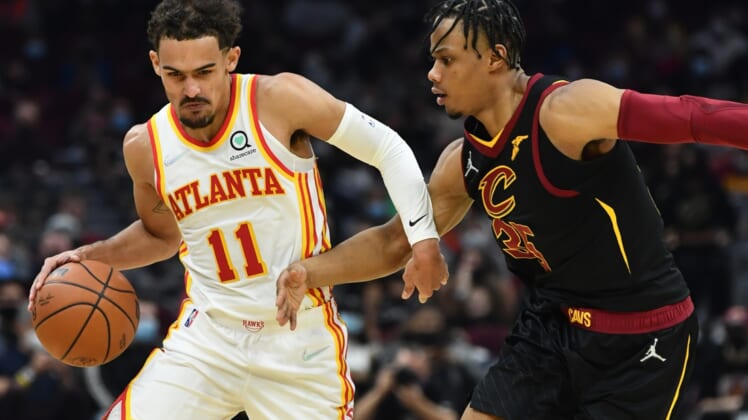 Trae Young produced 35 points and 11 assists to help the visiting Atlanta Hawks erase a 16-point deficit and defeat the Cleveland Cavaliers 121-118 on Friday.

Young missed his first six shots and did not score in the first quarter. He wound up 11-for-28 and made five 3-pointers in a season-high 42 minutes. It was the 15th straight game in which Young scored 25-plus points, and he now has a league-leading 17 points-assists double-doubles.

Atlanta led by eight in the fourth quarter, but Cleveland got within 119-118 on Brandon Goodwin’s hoop off an inbounds play with 10.2 seconds remaining.

Young made two free throws with 7.6 seconds to go, and the Cavs, who were out of timeouts, missed a long 3-point attempt at the buzzer that would have tied the game.

The Hawks got Lou Williams back from the health and safety protocol, and he had 14 points. Atlanta was missing 12 players on the COVID list.

Atlanta’s roster got shorter when Cam Reddish went down with a right ankle sprain in the first half and was unable to return. Reddish had only two points in 10 minutes.

Cleveland had only two players out because of health protocols: Darius Garland and Cedi Osman. Kevin Pangos started his second straight game in place of Ricky Rubio, who sustained a season-ending knee injury earlier this week, and he had eight points and four assists.

Atlanta trailed by 16 before recovering, outscoring Cleveland 40-25 in the third quarter. The Hawks regained the lead when Young made a 3-pointer with 2:42 left in the third for an 85-84 edge, and they stretched the gap to 91-88 going into the final quarter.